The rough economy is taking its toll on Main Street in many ways.

It has now trickled down to the 2009 Douglass High School Reunion. 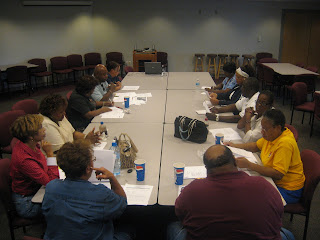 Alumni dues for membership in the Douglass Alumni Association will increase from $5.00 to $25.00, making pre-registration fees increase from 100 dollars to 125 dollars, for the three-day event next summer. The decision was reached after heart-felt discussion at the Douglass Alumni Board meeting this past Saturday, October 11th, at a special meeting held at the Dobyns-Bennett Alumni Hall on the D-B campus.

After looking at reserving required things for the Reunion that have gone up from two years ago, the board seemed resigned to discuss the alternatives. "This is not a decision we make lightly," said Alumni President Doug Releford. "If we want to maintain just the same level of services that we had two years ago, we have to do something about the fees."

At the last board meeting, several of the board members familiar with pricing events were called upon to check into estimated prices for next year. 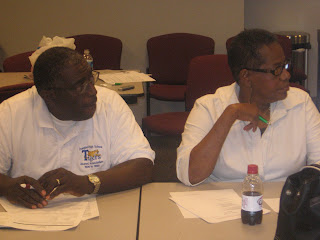 "Just judging from the prices that Sandra (Wilmer, board treasurer) and Andra (Watterson, board vice president) have given us, show that we will need every penny that we can get, to maintain the same services we had two years ago," pointed out board member Virginia Hankins. "After every reunion, we usually try to have about $2,500 dollars on hand to get the next reunion started, and breaking up the prices and letting people pay for separate events, will not let us pay for the essential things we will need. If we break up the prices, we will not have enough to cover the things we need. Right now, we are no where near the $2,500 dollars to get started."

Although the reunion efforts are starting out this time with less than the $2,500 the board would like to have to jump-start next year's reunion plans, Jenny said little fund-raisers won't do the trick. The board is planning several fund-raising items to help, among them School Book Fairs, rummage sales, dinners, etc, but
"unless you have one big gigantic fundraiser, we'll have to rely on raising the registration fee, and encouraging folks to pay in installments, starting as soon as possible," Jenny said. 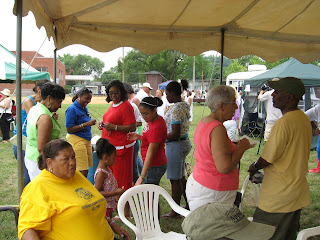 Last year, over 400 letters went out to every former student who attended Douglass Elementary and High School. Of that, 125 alumni paid their dues to attend the paid events, but many more came to Field Day, which is a free event. The list is updated to account for those alumni who have passed away.

The board also encourages everybody planning to attend the Reunion next year, to not put off paying the registration fee and the Alumni membership dues, again, $125 dollars this time. If the full amount is not affordable right now, please make installment payments, and that will be noted for every Alumni member.

The board also tabled for now, a motion to discuss the Reunion Golf Tournament, the registration fees of which directly fund the Douglass Alumni Scholarship Fund. Greens fees, as always, are separate and go directly to Meadowview. Board members felt that they needed to wait until alumni board member George Smith, one of the Golf Tournament organizers could attend a board meeting to provide an update on the event. 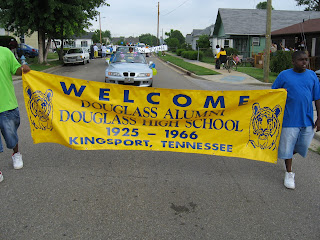 Alumni President Doug Releford also provided an update on the Association's application for non-profit status, saying it is progressing. "Right now, we are seeking incorporation through the Tennessee Secretary of State's Office in Nashville, which is a tedious process," he said. "We are working through that, trying to provide all the information they are requesting, and then we will get that information to Jeff Faulkerson, who's helping us with the I.R.S application, and then we'll send that the Internal Revenue Service for consideration." 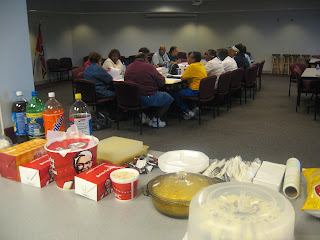 In other business, the Board discussed several upcoming events, and there is a change in the location for the next School Book Fair. The new location will be in the old Douglass School Auditorium on Louis Street, at the other end of the V.O. Dobbins Center in Kingsport. Calvin updated everyone on the cataloging of the school books for our School Book Fair in the old Douglass Auditorium next Saturday October 18, 2008 during the Class of 68 Reunion, and the next Fair planned for the Douglass Alumni Rummage Sale the following Saturday, October 25th. The books are cataloged alphabetically, and reservations are coming in for folks who want to purchase certain books. Those have now been isolated from the rest of the books for sale. All books are $1.00 and proceeds go into the Alumni Association General Fund.

The Douglass Alumni Rummage Sale and Bake Sale will be the following Saturday, October 25, 2008, and there will also be a School Book Fair that Saturday as well. The time is from 7 AM until 4 PM. The location will be at the Bethel A.M.E. Zion Church on Mapleoak Lane in Kingsport. Douglass Alumni are are encouraged to bring any gently-used clothing to donate to the Rummage Sale, and also any baked items for sale. Please bring those. Proceeds will go to the Alumni Associatin General Fund.

Jenny Hankins reminded everybody about the Class of 68 Reunion next Saturday, October 18, 2008, with the banquet being at the Golden Corral in Kingsport at 1910 North Eastman Road. 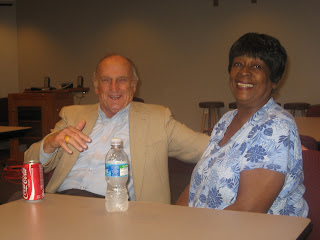 The Douglass Alumni Board also acknowledged the fact that the meeting was being held in the D-B Alumni Hall, at the south end of the J. Fred Johnson Stadium, Indian Circle Drive. D-B alumnus Bill Lee was there for a few minutes to welcome the Douglass alumni early arrivals to the hall. Afterwards, all Douglass Alumni were given two T-shirts that commemorate the D-B Great Reunion 2 years ago. The Hall is a wonderful place for all alumni of Dobyns-Bennett to gather for meetings, especially during football season. Thanks to the D-B Alumni Association for extending the invitation to hold our meeting today, in the Hall.

NEXT DOUGLASS ALUMNI BOARD MEETING: Saturday, November 15, 2008 at 1 PM at the St. Mark's Methodist Church Fellowship Hall, Maple Street, Kingsport. Please mark your calendar for this, as well as all the other events of our Douglass Alumni Association.
Posted by douglassriverview at 4:40 PM