In these tough economic times, folks in Kingsport found lots of good deals on gently used clothes, at the Alumni Rummage Sale held at Bethel AME Church on Saturday, October 25, 2008. 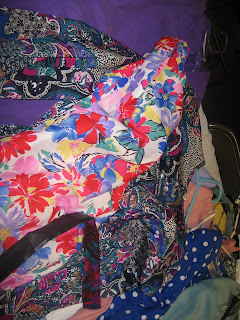 Just before dawn Saturday, the good started coming in for sale, and by 8 AM, people were already stopping by. Together with the Bethel AME choir practicing for Sunday service upstairs, it made for a warm, joyous, festive atmosphere.

Just about every clothing item you could imagine was for sale. Women's blouses, pants, pant suits, and slacks of all styles could be found, as well as work-around-the-house clothes for sale. The colorful designs were tempting for many people, as they perused the various items. Among the men's clothing were pants and shirts, and even some hardware knick-knacks.

The rummage sale also included a bake sale, with delicious bakery bars, cakes and other delicacies. Some of the bakery items were so tempting, they did not make it home from the sale. 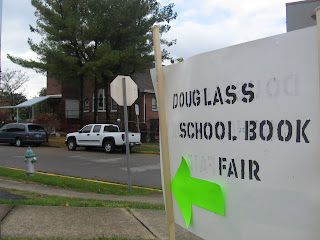 The 3rd Douglass Alumni Book Sale was also a huge success, bringing in people browsing for a new book to read, to former Douglass alumni and their families, eager to reunite with the school books of their past. Some alumni saw books of their former classmates, and purchased them to give to those friends who were not there. Other book fairs are to come in the future.

The Book Fair and Rummage Sale event was streamed live on the Douglass Alumni Website, and a special thing happened during the streaming.. the camera was taken around, showcasing all of the items for sale, and that prompted many sales by people watching, who called those present at the event and made purchases right then and there! One viewer wanted to see the neckties for sale, and when Pam Sensabaugh held them up each and modeled them to the webcam, the viewer bought every single necktie there. 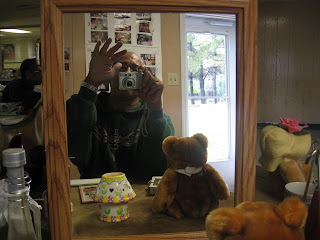 It was so good to see everybody come out to support the Douglass Alumni Association, in its efforts to raise money for its philantropic events, along with the Class of 68's generous donation to the Scholarship Fund last Saturday.

Stay tuned for more events of this type in the future!
Posted by douglassriverview at 11:48 AM