A new chapter has begun in the long and distinguished life of Jill Ellis.

One of Douglass High School's last remaining teachers has now moved to Charlotte, North Carolina, to be near most of her family that has lived there for years.

Son Michael Ellis also made the moved this past Saturday, and Dawnella, her oldest daughter and member of the Douglass Alumni Board of Directors, says she will soon join the rest of the family in Charlotte.

"It's bittersweet for me," Mrs. Ellis, often referred to as "Mama Jill" by Douglass faithful and the Riverview Neighborhood. "Sweet, in that I will be with my children, grandchildren and great-grandchildren, bitter in that you hate to leave where you have lived for most of your life.. the familiar surroundings and things you watch and nurtured growing up. Those are now fast-changing, and I hope that some of my nurturing helped them grow. That's one of the legacies of watching things you've nurtured.. watching them grow, then setting them free and hoping that your nurturing has helped them grow into something productive. I did that with my children, as well as my extended family in Kingsport, and trying to help others with the projects that affect our Riverview Neighborhood." 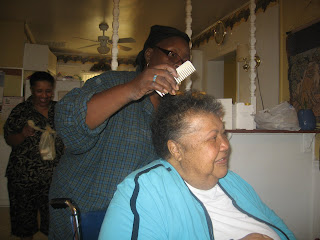 As she got ready to leave on her last full day as a Kingsport resident, "Mama Jill" reflected on her life in Kingsport. "If you consider a generation as 20 years, I have lived through 4 of them," she said. "It leaves you with a sense of 'I remember back when..."

"I had a lady call me to say goodbye the other day, and she said 'well if you're leaving, leave me your hats.' She's just a dear lady, about a generation behind me."
"Leave me your hats," she laughed. "If that's a legacy, if that's it.. I love hats, but I never though of them as being a legacy," she smiled. 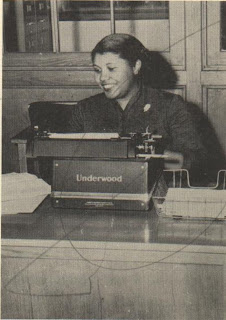 "Mama Jill" started out as a secretary to Professor V.O. Dobbins at the old Douglass High School on East Walnut (now East Sevier) Avenue in Kingsport, at the corner with East Center Street, the old Bristol-Johnson City Highway, U-S 23 and 11W. "I was hired about the same time as Joe Baylor," she remembers. "It wasn't long until we moved into the new Douglass School in Riverview. John Cox, who was teaching at Artie Lee, the black school in Dante, Virginia, begged me to come work there, because he needed a science and music teacher up there. I told him, I don't even have my teaching certificate yet (she was working on it at ETSU, and the law then let potential teachers teach for on-site experience if they'd applied for a certificate). He said, "I don't care, I need you.' I rode with him every day from Kingsport to Dante for two years on those old narrow two-lane country roads, some of them dirt roads, dodging coal trucks."

She continued, "Dr. (Former Kingsport school superintedent Dr. Dana) Swick heard about that, and told me "that's prepostrous.. you don't have to do that. Remembering me as a secretary at Douglass, he said we have so many students at Douglass now.. I need a 6th grade teacher there, because we've had to split the 6th into two grades, and I need you to teach the other 6th grade. I told him I'm still working on my teacher certification at ETSU.. he said 'I don't care, I've got to have a 6th grade teacher. So I came back, Faye Long taught one 6th grade, and I taught the other." 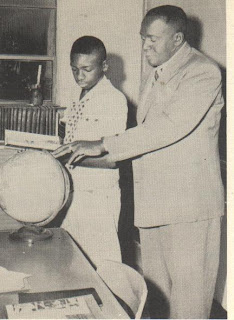 But in the early 1960's, integration was in the air, and at least one Douglass teacher had been very nervous about the future. Turns out, a decision that teacher would make, charted Mrs. Ellis' teaching direction for the rest of her career.

"Mr. (Oscar) Gill was quite concerned, saying 'they'll will never take us in the white schools.' He had been a science teacher and guidance counselor at Douglass, and Mr. Dobbins said, 'if Gill leaves, I've got to hire you as a guidance counselor. I said 'I can't be a guidance counselor, I've got my certification in high school and elementary school. He said, 'I'll make it parttime, you can counsel in the morning, and teach science in the afternoon. Mr. Gill did leave, and I moved into his two jobs until Douglass closed in 1966."

"Tennessee had been slow about desegrating its schools," Mrs. Ellis remembers, "and after Douglass closed, the Kingsport School System sent me around to all these places to help phase in the integration, whites and blacks. Well, the blacks didn't need to face integration, they already knew what was expected of them, and they didn't have any problems. The trouble was, the city did not prepare the white students and teachers about the blacks that were coming in to their schools. The black kids knew how to deal with the white kids, but the white kids did not know how to deal with the black kids, especially after they'd grown up with all the things on television about blacks wanting equality and the Civil Rights Movement."

"Everybody was scared," she said. "To this day, Kingsport still bears the scars of that time."

"The School System felt that, during the transition period, my skills would be best served as a guidance counselor at Dobyns-Bennett, so I moved into that position there," she said.

It was a position she would hold for the next 30+ years. 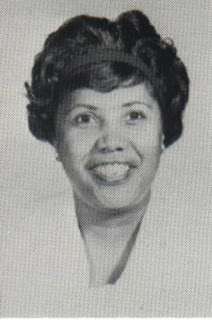 "I have no regrets," she says. "I loved teaching.. it took me that long to find out what I wanted to do. I really enjoyed teaching science because that was my major in college at Swift, Rogersville.. it was right down my alley. I also enjoyed the spring art festivals at Artie Lee in Dante--our teams in drama and speech always won awards. I also liked the plays and recitals that Mr. Dobbins had us do at Douglass. There was so much talent in our classrooms, that it was a treat to see it displayed every year."

Mrs. Ellis retired in 1992 under the care of daughter Dawnella and son Michael, and has spent the past 18 years, in long distance commutes with the rest of the family in Charlotte. "I'm anxious to rejoin the children, although I will miss Kingsport. Because it's difficult for me to take long trips and my health isn't that good, the move to Charlotte will be permanent."

She's also hoping that people here at home will keep pushing for change. 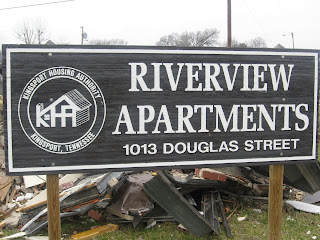 "Do not let up on the planned renovations for the new housing development in Riverview and the Douglass renovations," she says. "I'm really worried about the financial situation right now with money drying up, that Riverview will be left out, or moved to the bottom of the list on changes. I just have a bad feeling that the money to do the things that were promised to us, will dry up unless we keep pushing and reminding the city that it had been appropriated."

"It would be so disappointing, and that's not even the best word for it," Mrs. Ellis says. "Nobody can anticipate what's going to happen next, but 'KEEP THE DREAM ALIVE.' Don't lose hope.. keep on the city to fulfill its promises to us."

MAMA JILL, ON THE OCASSION OF "JILL ELLIS DAY IN KINGSPORT" 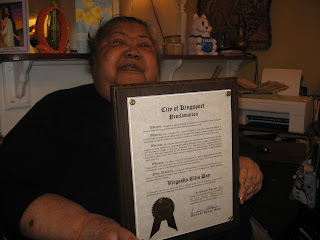 "I want people to remember their history in Riverview," she says. "As long as we have people that can still remember, each generation will have at least 50 years of history to look back on. Even though most of us will pass on, there will always be someone who remembers a story, an event, a person that they can carry on about Riverview."

"Always remember your history, and pass it on."

As she prepared to leave Kingsport and her home for probably the last time, "Mama Jill" was reminded of a motto she adopted for herself that dates back to her college days at Swift. 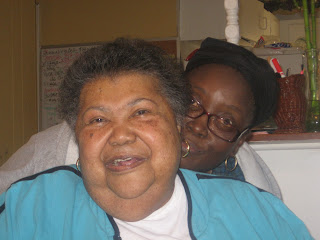 "Nobody's born a winner," she remembers, "and nobody is born a loser. But we are all born CHOOSERS. One of my teachers at Swift always told all of us black students, 'if you think you are a leader and you're out in front, and you look over your shoulder and there's nobody behind you, you're not leading.. you're just out for a walk. You must be leaders by example, and folks need to be behind you following in your footsteps. If nobody's behind you, you're not really leading anybody, you're just out taking a stroll."

"Nobody's born a winner, or a loser. We are all born choosers."
Posted by douglassriverview at 4:39 PM