THURSDAY---THIS ARTICLE IS IN ANTICIPATION OF THE DOUGLASS-RIVERVIEW COMMUNITY MEETING WITH THE CITY AT 5 PM ON OCTOBER 14TH. 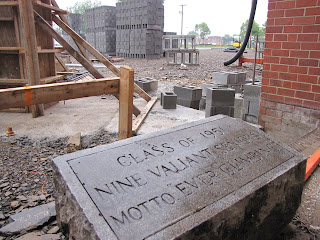 Kingsport's Riverview Community and the Douglass Alumni Association will have a unique opportunity soon, to preserve memories of the historic Douglass High School and the South Central neighborhood.

Accordingly, design specialists and city fathers, plan to take advantage of that, in the area of old photos and pictures of the neighborhood and the school, sculptures hopefully commissioned by local sculptors, and artwork equally commissioned by Riverview artists.

The city says, the time to act is now, and the place to begin is at a Riverview-South Central Community meeting on Wednesday afternoon, October 14, 2009 at 5 PM at St. Mark's United Methodist Church. At the meeting will be city planners, representatives from the Arts Council, the renovation designers and people looking for ideas to preserve the history of the school and the neighborhood. 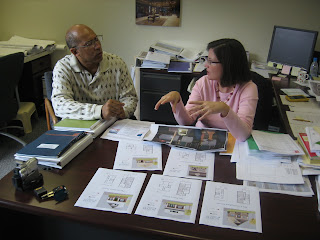 "We are hoping to get some input from the Riverview and the Douglass School Alumni, possibly doing a 'Call For Artists," says architect Dineen West, whose firm, Cain, Rash and West is the architectural design specialist for the renovation of the V.O. Dobbins Sr. Community Center. Part of the new building will house Kingsport's non-profit center, while another part containing a new gymnasium to go along with the old Douglass gym, will be under Kingsport's Parks and Recreation. Still, another part will be expanded classrooms for the local Headstart program, while the 4th part will be a new Douglass Community Room, that houses the headquarters for the Douglass Alumni Association. 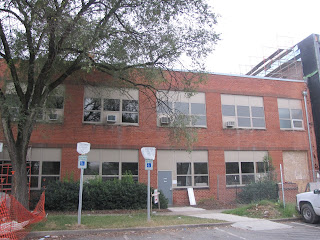 "Right now for example, we've got space out front of the "Neighborhood" side of the building on Louis Street for a sculpture," says Mrs. West. "What kind of sculpture will be dependant on what the Riverview residents want. We're checking to see if we have money to commission one, or just using one of the modern ones like the scultures we have downtown. We really want to have one, that's more reflective of African-American culture, especially that of Riverview's past as a family-neighbor atmosphere, but we are still in the discussion stage on that. Time is of the essence here, and we need to get started soon." 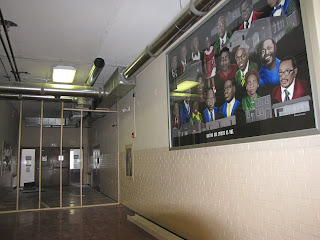 And that's where the Douglass Alumni-Riverview Community comes in. The "Call for Artists."

"We need the community to give us input," she says. "We don't want to just put something that WE have to pick, and then hear 'well we didn't have a chance to decide on that.' The fact is, we've got some new areas in the renovated building that lend themselves to artwork, and other areas outside that lend themselves to sculpture. Some are great areas to place pictures of life in the school and the neighborhood, and others would be good to place artifacts from the community." 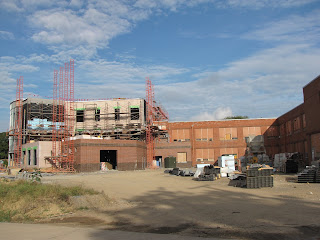 The outside courtyard, where the Douglass Band once practiced, is destined to be a sculpture garden.

"The artwork there could be built in as a permanent part of the design," she says, "and before we pour the concrete slab there, we need to know if a sculpture is going there. We're planning an entrance/exit from the Douglass Community Room to that courtyard, and it will serve as a beautiful quiet area for lunch and meditation." 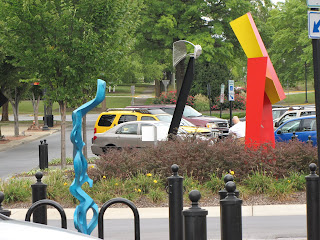 "If there are any artists in the community," Mrs. West says, "please let us know at the meeting on Wednesday, the 14th. Likewise, we are also looking for sculptors, photographers, people with old photographs, and artists to paint possible murals. Also technicians, designers, weavers, even people who can do mosaics, metals, brick.. whatever is representative of the neighborhood. Even outside, if there are landscape designers within the Douglass and Riverview families, we want to hear about them, so we can find out more about them." 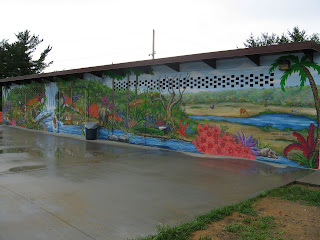 "The community was a great help at the splash pad," she says. "We were able to take their ideas on the Douglass Tiger mascot and not only honor the heritage of the school mascot, but turn it into something memorable for the kids. It lent a whole new dimension to the renovation. With the Dobbins Center idea, we don't want to turn it into a museum, but we obviously want to hold true to some of the memorabilia that we have, and we also want to have some new stuff, too."

"Everybody has a chance for input, and no reasonable suggestion will be ignored."
Posted by douglassriverview at 8:43 PM