THIS IS A REPRINT OF THE ARTICLE POSTED ON YOUR DOUGLASS WEBSITE ON APRIL 19, 2009:


The specter of racism has reared its ugly head in the Kingsport area once again. 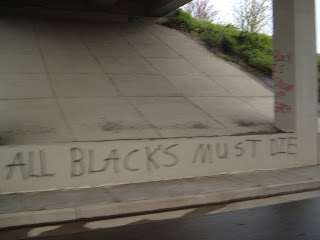 This past Sunday, an African-American Kingsport resident, on the way to visit relatives on the south end of town, noticed at least three or four different racist graffiti writings on the concrete supports underneath the Interstate 26 bridge over Reservoir Road. The first one read "All blacks must die" on the bottom concrete support arch. The location is within direct sight of the Meadowview Conference and Convention Center, and was also visible from all four entrance and exit ramps to I-26.

The area is considered the modern gateway to Kingsport. 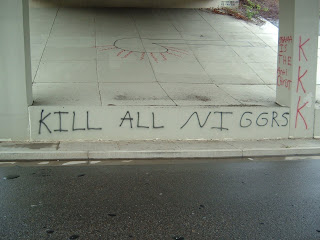 Another writing is not printable, but the picture says it all. The use of the n-word, although misspelled, was reminiscent of something our forefathers endured many years ago. There were also references to the "KKK" and a phallic symbol. At this point, nobody knows how many motorists and passersby saw the writings. 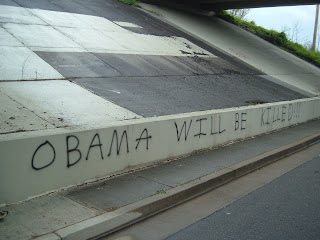 A third graffiti writing, read "Obama will be killed." The FBI and Department of Homeland Security are currently investigating threats like that against the president, allegedly leveled by two government-described white supremacists in West Tennessee. Both Daniel Cowart and Paul Schlesselman want government prosecutors to throw out evidence collected against them, saying they were illegally arrested and searched. Both men are jailed without bond, and no trial date has been set.

Ramon Willis was with family, when one of his family members got a call about the graffiti. Mr. Willis and some of his family went out to see for themselves, and says he was overwhelmed by what he read, scrawled on the bridge supports. But a bigger surprise was yet to come. 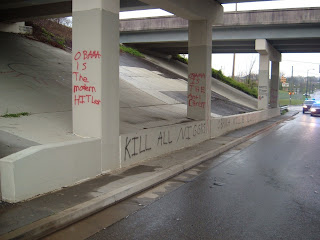 "When we first got out there," he says, "this white man stopped and came up to us saying 'please don't hurt my daughter, please don't hurt my daughter.' We all looked at each other like, what is this man talking about? It was then he said his daughter's boyfriend did it and what shocked us was, he said, he had done it before, right here in this same spot. We just couldn't believe it, and when we went closer, we saw where it had been painted over before, a couple of times in that same spot."

"People were riding by," he says. "Some of them were astonished, some of them stopped with their mouths open, some people couldn't believe what they were seeing. Some white guys were riding by grinning, like oh it's down like that, all kinds of stuff. I wondered why none of the media was out there, why didn't they come out and take a look at that stuff. It was just crazy." 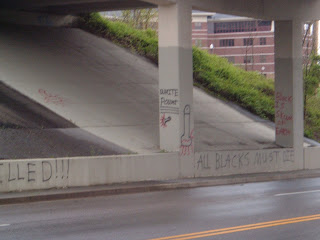 "After we were out there a while, things started getting crazier," Mr. Willis says, "and then the cops came and started taking pictures, too. They were talking about (Saturday and Sunday) being Prom Night and they didn't know who drew all this, but they said they would call the state (DOT, who maintains state and interstate highways in Tennessee). After the cops took pictures, they left. We left and came back 2, 3 hours later and the highway department was out there covering it up." 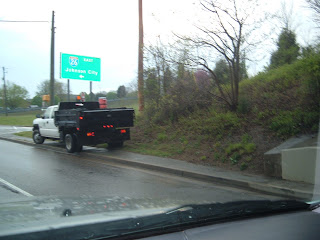 For the record, this reporter sent an email to the Kingsport Police Department through their website, and is waiting to hear back concerning any investigation the department may be doing on the racist graffiti.

"I cannot believe that 45 years after the Civil Rights Movement, I am still seeing this nonsense, and in my former community," says Tanisha Charles, whose family member first saw the graffiti and photographed it. "Obviously, the perpetrators of this crime are ignorant and ill-educated because of what they wrote." 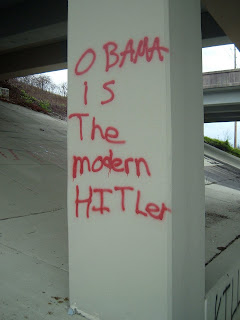 Ms. Charles was bothered enough by the racist graffiti, to send a concerned note to the city of Kingsport. In her letter "To Whom It May Concern," Ms. Charles talked about the "negative light shed on a community already notorious for racial prejudice and opposition." She also said she hoped the city "is taking strides to remove this disgraceful portrayal of a People whose country used them to become the country it is today," and she further hopes "that someone in Kingsport is doing something to try and bridge the racial gap that exists in the area."

In response, Ms. Charles received a response from Tim Whaley, Kingsport's Community and Government Relations Director, who wrote to her "it is with the greatest regret that we find such shameful, horrific language scrawled on an overpass in our fair city." Mr. Whaley went on to write "Words are totally insufficient to express our outrage, frustration and despair that someone might still harbor such ignorant views. Please allow me to express how deeply ashamed we are, that anyone in the region might spew such hate."

Also in his letter to Ms. Charles, Mr. Whaley says the city "continues to endeavour fiercely to heal the racial divides of the past, and have invested more than $20 million dollars, partly in partnership with the federal government to provide new housing opportunities, employment and educationa opportunities, replacing deteriorating 1940's-era housing and creat a first-class community center in the Riverview area that provides new opportunities, while embracing the heritage of the former Douglass High School." He also mentions that the new $8 million dollar V.O. Dobbins Center project is funding entirely with local dollars.

Ms. Charles says the response from the city was fairly immediate, but Mr. Willis says, more is needed.

"I was really upset by the comments from the Whaley man from the city," Mr. Willis says. "The city hasn't done anything for us yet. They can't even keep dudes from putting up garbage like this, because that man said dude has done it before."

It wasn't too long ago, last fall in fact, that racial graffiti was observed on a road sign near New Canton, the location of one of upper East Tennessee's oldest African-American communities. A yellow caution sign signaling "children at play" was spray-painted with a racist derogatory reference to the n-word on a country road, less than a mile from New Canton's black residential area. The picture sparked outrage from people near and far, black and white, decrying the intolerance and ignorance of some people. 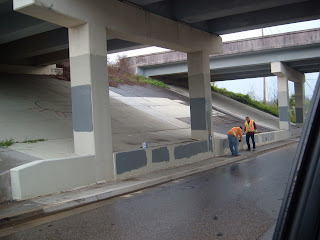 Again from at least before Sunday until Sunday afternoon, it is not know how many people saw this latest form of racism.

Ms. Charles says, no one should tolerate this kind of ignorance, saying if racist graffiti or anything else racial in nature is observed anywhere in the area, she urges residents to speak out about it.

Mr. Willis has a different view.

"I was just visiting," he says, "and I'm thinking 'you all still got this stuff going on here, in this town, right NOW? I don't live here, but I don't know if I would want to come back, knowing that somebody thinks bad enough about black people, to put it up in public and get away with it."
Posted by douglassriverview at 1:04 PM