Next step: Kingsport to Break Ground on New Homes in Riverview

Groundbreaking and beam signing event will take place in the Riverview community on Wednesday.


KINGSPORT — The second phase of a multimillion-dollar housing redevelopment project gets under way this week with the groundbreaking of new rental properties on the site of the old Riverview Apartments complex.
At the same time, the city plans to hold a beam signing event at the V.O. Dobbins Community Center, which is currently undergoing a $5.9 million renovation and expansion. 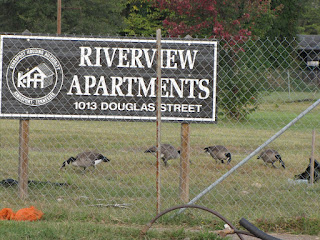 The groundbreaking and beam signing event will take place in the Riverview community on Wednesday. Both projects are being done in connection with the HOPE VI project — a $30 million redevelopment project taking place in two Kingsport neighborhoods — Riverview and the Sherwood/Hiwassee area of town.
The HOPE VI project began nearly three years ago when the city received $11.9 million in HOPE VI revitalization funds from the U.S. Department of Housing and Urban Development. The plan calls for replacing old, run-down structures with new, affordable houses. 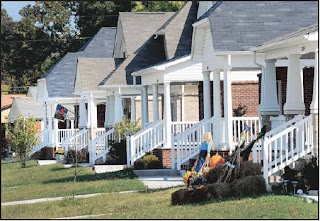 Phase one involved replacing 29 houses along Sherwood and Hiwassee with 24 new, affordable homes. The second phase of the project calls for 32 similar houses to be built on the old Riverview Apartments site, with six additional houses built in the Riverview community.
Doris Ladd, HOPE VI director, said the Kingsport Housing and Redevelopment Authority has signed with Armstrong Construction to build the Riverview homes, with grading expected to begin this week.
Ladd said people will be able to see structures by the first of the year, with all of the houses done by December 2010.
All of the houses will be around 1,500 square feet in size and look like the ones built along Sherwood and Hiwassee. Most will be single-family houses (three bedroom, three bath) while eight will be duplexes (two bedroom, two bath).
Total cost of phase two is approximately $8.5 million, which includes construction, architectural and engineering fees, legal costs and environmental work. A breakdown of where the money came from is $4 million in HOPE VI dollars, $4 million in low-income housing tax credit dollars from the Tennessee Housing Development Association, and a $380,000 federal home loan bank grant.
Ladd said the collapse of Freddie Mac and Fannie Mae last year delayed the process of the KHRA acquiring the low income tax credits by five to six months.
“But we’ve got them in place, and we’re excited because we’re moving forward,” she said.
The new Riverview houses will be rental units through the KHRA, and under the credit program the houses will have to remain rental units for 20 years. Potential renters will have to meet certain qualifications (joining the community supportive service program and be in school or employed 30 hours a week) and the rent will be based on an income formula.
As with the Sherwood/ Hiwassee houses, the KHRA is first offering the new houses to displaced Riverview residents, then to residents living in other housing developments or Section 8 housing, then city and county employees, and finally the general public.
Ladd said about 50 former Riverview residents have indicated they would like to come back to rent these new houses.
“We’re working with all of those families, and that includes some non-Riverview residents,” Ladd said.
Posted by douglassriverview at 11:31 AM