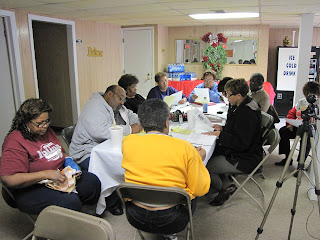 Minutes of the last meeting was read by Secretary Thelma Watterson, motion to accept the minutes were made by Calvin Sneed with the necessary corrections. Motion carried.

She stated that there is $6,167.42 in the treasury and $423.54 in the scholarship fund. Motion to accept the financial report was made by Louetta Hall, second by Andra Watterson. Motion carried.


News from the October Community Meeting:

Calvin stated that he pulled 46 pictures from the Douglass Annuals, those pictures will be enlarged and placed in the lobby of City Hall for Black History Month with descriptions of each picture. Later the pictures will be place in the V.O. Dobbins Community room, hallways and etc.

The V.O. Dobbins Center is now the V.O. Dobbins Complex. There were some concerns about the use of complex, but Calvin explained that Alumni and Riverview resident voters who picked complex, agreed with the city that "complex" in this instance is used as a noun and not an adjective. Also there are many other organizations that will occupy the building. 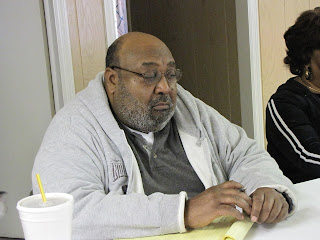 Douglass Releford stated that Jeffery Faulkerson was instrumental in helping us obtain our 501 (C) 3 status,and Jeffrey asked Douglas if we (the Alumni Association) could make a donation to his organization. Andra Watterson suggested $200. Motion to accept was made by Andra, second by Louetta Hall. Motion carried.

Calvin Sneed presented the Charter Business Quote. Charter Communications is the company that the Kingsport has picked to service the V.O. Dobbins Complex non-profit offices. The Working Board chose Offer 1 for $89.99 with a 12-month term. The packet includes Charter Business High-Speed Internet, up to 10Mbps, and a Charter Business Telephone. One business phone line, 12 calling features, and Unlimited Long Distance. Ozine Bly suggested that we accept the Charter Offer 1 and next year we could add it to our proposal.

Douglas Releford commented that we should be moved in our office the week of July 4th, if not sooner.

He also stated that the furniture will be used items. We will have stainless steel appliances (stove, refrigerator). We will also have 2 new computers, monitors and a color printer.

Andra Watterson will donate a stainless steel microwave and coffee pot in memory of her (Father, Mother, and Sister).

Thelma Watterson will donate a toaster.

He also passed around a letter from The House of Representative State of Tennessee from State Representative Tony Shipley, inviting the Alumni Association to the 50th Anniversary of the Civil Rights Sit-In.

Douglas Releford met with Morris Baker, who is over an organization that gives grants to minorities. The grant will help promote Black Art. We could even get a part-time secretary if the minority grant is awarded. Louetta Hall suggested that we could volunteer a couple of hours a day to be in the office, and it was suggested that we make out a volunteer schedule so those that want to volunteer could sign up.

Calvin Sneed has been working extensively for two months with Jill Ellis (Mama Ellis) about the Rosenwald Schools and trying to obtain a historical Monument for Douglass School. We have somuch information about the school that the monument will be two sided. The monument is paid for. Deciding a place to put the monument was tabled for our February meeting.

Lillian Leeper stated that she would like to see all the work that Calvin is doing published in the Kingsport Times-News.

Adjournment was made by President Douglas Releford, Second by Thelma Watterson.