Vaughn Picks up Petition for Rematch with Shipley

Former Tennessee Democratic state Rep. Nathan Vaughn of Kingsport has picked up a nominating petition to again run for the 2nd House District seat, according to Sullivan County Elections Administrator Jason Booher.
To become an official candidate, the petition must be filed by noon on April 1st.

The man who defeated Vaughn by 326 votes in a contentious 2008 race, first-term incumbent GOP state Rep. Tony Shipley of Kingsport, has already filed his petition with the Sullivan County Election Commission.

Vaughn’s defeat caused a domino effect in Tennessee politics, with the GOP gaining a one-vote majority in the House and maintaining its working majority in the Senate.
With control of both houses of the legislature, Democratic county election administrators were replaced with Republicans across the state.
Democratic constitutional officers were replaced by the legislature with Republicans, and GOP lawmakers also used their power to pass pro-gun and pro-life measures in 2009. 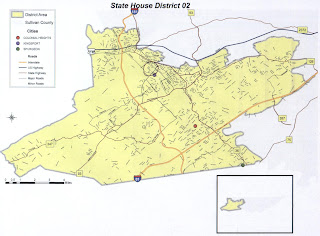 Republican tactics used to unseat Vaughn, who became Northeast Tennessee’s first African-American state lawmaker in 2002, still evoke bitter feelings among Democrats.
A Tennessee House GOP research analyst entered a guilty plea last year to a misdemeanor charge of using Vaughn’s name in a fake Internet campaign against him.
Vaughn had a restraining order issued to forbid the analyst, Scott Gilmer, from using Web domain names such as www.nathan vaughn.com, www.nathanvaughn. net and www.nathanvaughn.org.
Gilmer was paid for “consulting” out of Republican campaign accounts and remains employed as a state aide to House GOP Caucus Chairman Glen Casada of Franklin.
One of the trick Web sites said Vaughn was a friend of organized labor.
In August 2008, the Kingsport Firefighters Association and Kingsport Coalition of Police held a re-election rally for Vaughn. After that event, images from the rally were posted on the www.nathanvaughn.com address and a message asked the public to “join the AFL-CIO and other unions in supporting Rep. Nathan Vaughn.” The Web page called Vaughn “one of the loudest voices on behalf of Big Labor.”
According to state election law, communication in the candidate’s name is supposed to be authorized by the candidate, his campaign or his representative.
During the campaign against Shipley, Vaughn was also attacked in a Tennessee Republican Party direct mail piece that electronically pasted a picture of his head on a blackbird.
Vaughn was portrayed in the direct mail piece as “part of the liberal, big government flock” with President Barack Obama and U.S. House Speaker Nancy Pelosi.
Defeated GOP presidential nominee John McCain beat Obama by 41 points in Sullivan County — or more than 26,000 votes.
Tennessee’s 2nd House District includes parts of Kingsport, Colonial Heights, Indian Springs and Sullivan Gardens.
Posted by douglassriverview at 11:53 AM