Once again, as predicted... Snowman-making weather hit Riverview and South Central Kingsport over the weekend of January 30th, 2010. 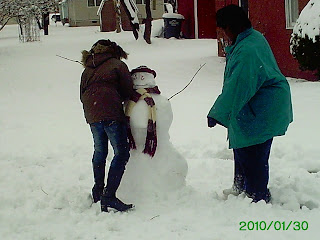 The third major snowstorm struck the neighborhood Friday and Saturday, keeping most people inside, but bringing some parents outside to help the kids rebuild the snowperson that melted only a few short weeks ago.

To see a slideshow of the January 30, 2010 snowfall from Willie Hodges, please click here.

"In different places, I measured anywhere from 5 to 7 inches," says Riverview resident Jeannie Hodge, whose husband Willie, snapped a few pictures for us. Official estimates from the National Weather Service raised the snowfall amount to close to 8 inches east of Kingsport into Southwest Virginia and Western North Carolina. 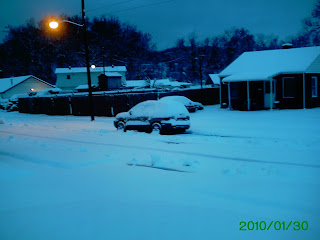 The snow started overnight Friday, and continued well into Saturday morning. "We haven't had this much snow in years in the neighborhood."

The first snowfall that hit Riverview back in December landed anywhere from 7 to 10 inches total, triggering many nostalgic comments from former residents and Douglass alumni about how it reminded them of days past, when the advent of frozen precipitation would created a quietness in the streets.. a cold blanked of serenity in Riverview. The only sounds you'd hear, would be kids sledding and sliding down Clay Hill (those who didn't have sleds, improvised with cardboard boxes), or snowball fights (the bigger kids used to slip rocks in theirs), or riding bicycles fast down the street, then skidding out sideways like the Dukes of Hazzard. 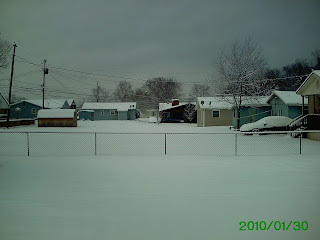 On this third snowfall of the 2010 season, the quiet serenity is still present, but much of the excitement of a snowfall is lost during the renovation and reconstruction work going on in Riverview.

"The manager was smiling at the Food City," Jeannie laughs. "He told one of the news people that this time, he was ready and ordered early. More milk and more bread was here, and he didn't run out."

Van Dobbins, Jr. reports that Manna meals did not serve on Saturday. Normally, the service visits the sick and shut-in with hot meals, to make up for the one they don't get from Meals On Wheels during the week. "Some of the hills, we just could not get up or down on," he reports. 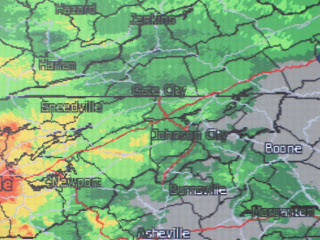 Your Douglass website sent out an advanced weather warning this time, using information from the National Weather Service, WCYB-TV, information about weather patterns learned over the years from doing weather in Knoxville, and personal knowledge of how the weather usually has been in Riverview over many years. That forecast is still posted. Using that comparison, we were able to come up with a forecast that projected on the low end, what the community would get, and what the high end would also be.

"You and Mark Reynolds on Channel 11 started warning people early," Jeannie says, "and that was good. Usually, the weather people get it wrong, but this time, you all hit it right on the head." 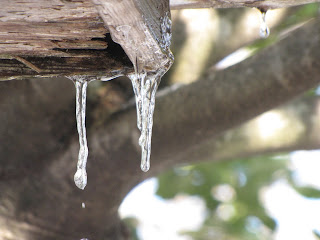 Please watch out for icy spots, though. As the snow melts, it'll create a sheet of wetness on the streets and roads. At night with below-freezing temperatures, that sheet is liable to change over to a sheet of ice.

But until the snow is gone (which should be in the next few days), at least for a while anyway, it's snowpeople-making time in Riverview!
Posted by douglassriverview at 11:29 AM