To correct masonry work, a new construction firm has had to re-brick all 24 houses.
Meanwhile, new pictures of the Riverview construction.


KINGSPORT — Work has been under way to repair all of the HOPE VI houses along Sherwood Road and Hiwassee Drive over the past two months, and depending on the weather, all of the repair work could be completed as early as March. 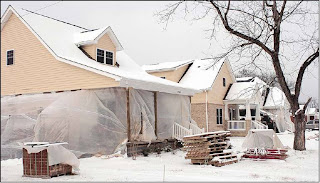 The HOPE VI project is a multi-million dollar redevelopment project — funded in part with a nearly $12 million federal housing grant — of two distressed Kingsport neighborhoods, Sherwood/Hiwassee and the old Riverview Apartments site.
Last year Cornerstone Housing of Maryland — the developer on the project — discovered Walker Construction of Chattanooga had not installed flashing in any of the 24 houses built along Sherwood and Hiwassee. Further review of the flashing issue led Cornerstone to discover other problems with the houses — poor masonry work and cracked concrete in the driveways, walkways and steps.
Soon after, Cornerstone terminated Walker’s contract and brought in Landmark Construction of Johnson City in November to perform the repair work.
Brent Walker, one of the owners of Walker Construction, told the Times-News in November that he stopped working on the project in July when Cornerstone stopped paying him.
“They never gave me a reason,” Walker said this week.
Walker also said Cornerstone stopped paying him before the flashing issue was discovered and that he stopped working before the contract was terminated.
“(The flashing) was one of the things that got missed, and I made an offer to remediate it in other ways, and (Cornerstone) said no,” Walker said in November. “When we found out at the end that there were some other things that needed to be done, we made an offer to come back and do it, and (Cornerstone) said no.”
To correct the masonry work, Landmark has had to re-brick all 24 houses. And according to Doris Ladd, HOPE VI director for the Kingsport Housing and Redevelopment Authority, Landmark is close to having half of the houses re-bricked.
The original brick is no longer manufactured, and the KHRA had to match the new brick as closely as possible to the original color.
“(Landmark) has made a lot of progress. They’re doing about two houses per week, which has worked out pretty well,” Ladd said. “The punch list ... they’re about 40 percent through that, and the concrete work is very close to finishing. A good week to two weeks to finish that up.”
At least half of the homes required concrete work, though some of the work was minor. One driveway never completed by Walker will have to be finished by Landmark, Ladd said.
Four of the houses suffered from drainage issues — water getting through the foundation and into the crawl space underneath the house. KHRA installed sump pumps in all 24 houses last year with plans to install a French drain behind the houses near Konnarock to help alleviate the drainage. Ladd said work to install the French drain has started and should be completed in about two weeks.
The last phase of the work will be the re-seeding of the yards, which could begin by March, weather permitting, Ladd said.
“(The homeowners) have been so good to work with and patient and understanding. The KHRA is committed to making it the way it should be,” Ladd said, noting none of the residents has had to be relocated during the repair work.
All of the houses are under contract, and only four are vacant at this time. Ladd said the brick and concrete problems have not affected the sale or marketing of the homes.

FOUNDATIONS LAID AT THE CORNER OF DOUGLASS STREET AND CARVER STREET, WITH PROGRESSING HOPE VI HOMES ACROSS CARVER IN BACKGROUND 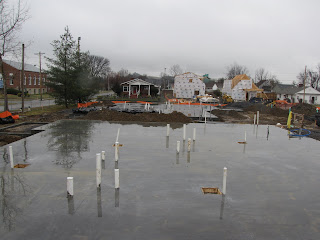 Work is also progressing “very nicely” on the second phase of the HOPE VI project — the construction of 32 rental homes in the Riverview community, on the old Riverview Apartments site. The KHRA broke ground on this phase of the project in October, and Ladd said six of the houses are being framed, with one scheduled to be completed by the middle of March.

The projected completion date for phase two is December 2010.
Posted by douglassriverview at 11:26 AM