‘Just looking, I think this is the biggest participation rate we’ve had.’
— Rev. Ronnie Collins


KINGSPORT — “This is not just a walk down Center Street. This is a walk with purpose.” 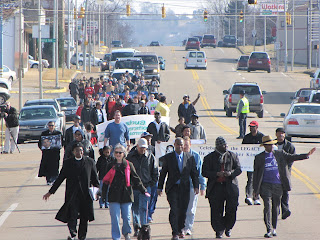 To see a slideshow of the parade, from start to finish, please click here.

Following in the footsteps of thousands who marched the streets of the South generations ago, the Rev. Ronnie Collins and one of the biggest gatherings ever for Kingsport’s Martin Luther King Jr. Day Parade took peaceful steps down the city’s main route Monday.
Collins said he and his group Tennessee/Virginia Fellowship Against Racism have reached four major goals in working with city leaders in relation to the MLK holiday, including the school system recognizing the day “other than a snow day.” 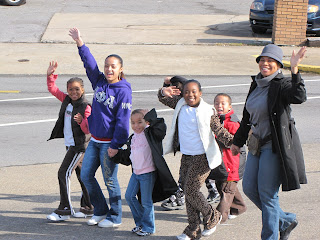 “Just looking, I think this is the biggest participation rate we’ve had. I think 150 is the biggest, and I think we’ve gone past that today,” Collins said.
He said getting even more groups, organizations and individuals to join the parade down Center Street will be the next challenge the group takes on.
“We have to get this parade to become part of the mainstream here in Kingsport,” he said. 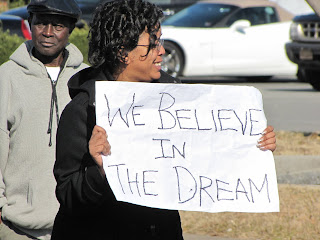 “Everyone thinks that the beginning of the parade season starts with the Fourth of July parade or Fun Fest. We need to let and show everyone that that season starts in January with this one,” Collins said. “The resources are there. We have our school children sitting at home on a day like this. They should know about (Dr. King’s) legacy. We plan to get things together and go before the city school board and try to get some things done.” 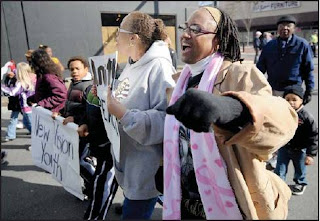 The event officially began in 1998 when a march was held along the same downtown route. Organizers got formal parade applications processed by city officials beginning in 2000.
“At that time, I would say there were more people out here because they were mad about things. Now it’s a celebration. We ain’t mad at nobody,” said former Tennessee House representative and businessman Nathan Vaughn. 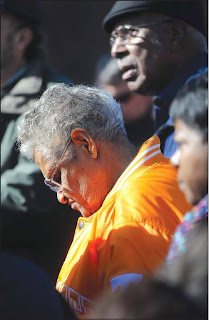 Betsy Pierce grew up in the coal mining community of Dante in Russell County and then moved to the Model City when she married. During those years, she remembers segregated restaurants and African-Americans having to sit at the backs of buses.
She said Monday’s gathering gave her a great feeling and a sense of real progress.
“I come from a long line of black people who struggled to get by, to live one with another. I think we have a long way to go, but things are better,” said Pierce. 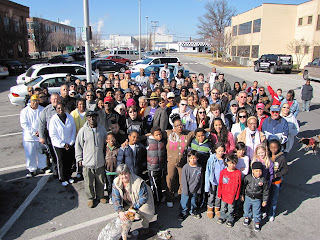 Posted by douglassriverview at 10:12 AM