We all know Thelma Watterson has an analytical mind.

You have to have one, to serve as the Douglass Alumni Association Executive/Working Board's Recording Secretary.

Now, everybody else knows that she's a winner. 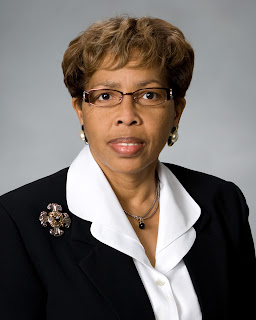 Our Thelma Watterson is the 2010 National Chemical Technician of the Year. The award is given for technical and communication skills, safety, reliability, leadership, teamwork, publications and presentations, and is given annually by the American Chemical Society.

Thelma is a personal care formulator at Eastman Chemical Company in Kingsport. Her specific job is to define and help compose the fragrances for personal care products, like deodorants, body sprays, and things of that nature for Eastman's Food Ingredients and Personal Care Performance Chemicals Division.

"I formulate personal care products, like deodorants, body sprays, things of that nature for Eastman. I take a list of ingredients and I put them together to see which one gives me the best results. It's like working from a recipe."

There were 13 other people around the country who also qualified for the award, but Thelma came in first, highlighting a 33-year career at Eastman. According to a news release on the award, she is an expert technician and scientist in fibers, filks, polymers, controlled release, instrumentation, automaktion, analytical testing, laboratory synthesis, statistical designs, interpretation of data and formulation.

Folks in the business world have been noticing her expertise.

"As I looked through her notebook," says Dr. Kevin Edgar, former professor at Virginia Tech, "I realized something astonishing... virtually every single experiment Ms. Watterson ever ran for me, ended u as part of a technical report, patent application or publication. She worked so carefully and diligently, her pride in her work was so strong, and her hunger to learn was so intense.. she made very experiment count. There was no carelessness, she did not permit poor communication, and her productivity was, as a result, remarkable. Indeed.. no other technician in my 27 years at Eastman so impressed me with care and dedication."

"I had no idea I was even nominated," Thelma says. "My boss came into my office one day with this grin on his face and I'm thinking, 'what's going on?' He says, 'we have just scheduled an impromptu meeting in the conference room.' I go in there and I'm the only technician in the room. 'Uh oh.. this is not good.' Somebody on the speaker phone goes 'we have just awarded Thelma Watterson the National Chemical Technician Award.' It still hadn't sunk in. The voice on the phone keeps talking and all of a sudden, it hits me: 'THIS IS NATIONAL!' Even now, it's still sinking in, because I didn't even know I was nominated."

In 2000, Thelma improved the quality of test samples for successful evaluations at one customer site, that resulted in business opportunities that made up 75 per cent of one company's business. Not only did she come up with appropriate samples, she also trained others to do it as well. In 2007-2008, she made such significant progress in a new project for the same company, it resulted in more than doubling the size of the business opportunity for a major project.

Right now, Thelma has more than 60 publications, patents and presentations to her credit. For winning National Chemical Technician of the Year, she'll receive $1,000, and will be presented the award at an honorary dinner at the American Chemical Society's Spring National Meeting in San Francisco, all expenses paid. 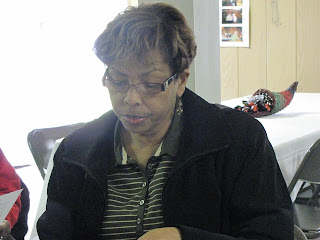 Thelma has many outside activities. She serves on the Committee on Technician Affairs, Northeast Tennessee Section.. trustee board member at the Shiloh Baptist Church, where she's also a choir member and hospitality committee member. She also serves as the Recording Secretary of the Douglass Alumni Association - Kingsport, and is the organizer for the Senior Citizen Nutrition Program.

She also has advice for future chemists and scientists.

""Always do your best," she says, "and don't give up your goals. If something ever goes wrong, it won't be your fault if you never give up. You never know, somebody might be watching your work. Somebody certainly was watching mine, so always do your best."
Posted by douglassriverview at 11:28 AM