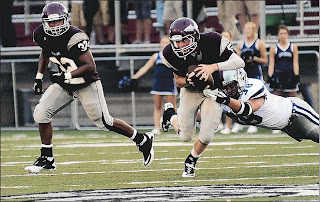 KINGSPORT — Like vintage wine, Dobyns-Bennett’s Chris Sensabaugh seems to get better with age. The 200-pound senior fullback rushed 22 times for 168 yards Thursday night, propelling the Indians to a 28-7 victory over Farragut in their football season opener. It increased his career yardage total to 3,271, the most in modern history by a D-B player. “We had it together and were ready to play tonight,’’ Sensabaugh said. “Our offensive line was phenomenal.’’ Sensabaugh, targeted by the Admirals’ defense, got much of his yardage on second effort. “I took the hits and kept on going,’’ he said. Farragut coach Eddie Courtney said Sensabaugh was harder to handle than he’d expected. “We didn’t get the hits on him like we did last year,” the Admirals coach said. “Putting him at fullback was a good thing for D-B’s team.’’ Tribe coach Graham Clark was pleased with most phases of the game. “It was kind of like leaning back in a recliner — it felt good,’’ he said. “We had a couple of great stands by our defense. We played the style of defense we like — aggressive. The offensive execution was good, overall. We made some big plays with athleticism.’’ 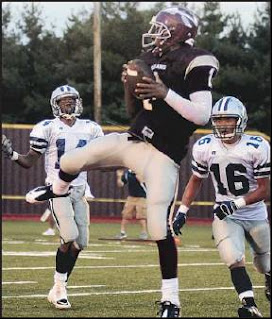 D-B outgained Farragut 356-137 with its newfangled Georgia Tech offense controlling the ball.
The Indians assembled three long scoring drives — 80, 77 and 80 yards.
D-B dodged a bullet early on. Farragut blocked a punt and recovered the ball on the Indians’ 12-yard line but was unable to punch it in. The Admirals missed a 25-yard field goal with 2:53 remaining in the first quarter.
The Indians then drove 80 yards for their first touchdown. Sensabaugh plunged the final 2 yards. 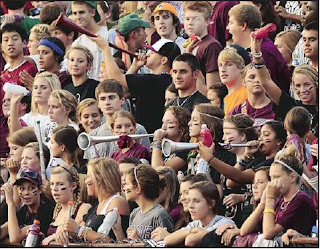 Again, D-B turned Farragut away from the goal line. The Admirals got to the 23 but defensive coordinator Darrell Watson’s adjustments halted the drive.
The Indians moved goalward for their second TD. With quarterback Sean Seabolt directing traffic, D-B got to the 4 on a 21-yard pass to Devaun Swafford. When Seabolt passed again, the ball was tipped and landed in Maurice Cannon’s hands for a score.
Jacob Johnson intercepted a pass at the Farragut 8 to set his team in motion for a 92-yard scoring march, capped by quarterback Cody Rule’s 4-yard keeper.
The play of the game occurred as the fourth quarter opened. D-B — ahead only 14-7 — was in a fourth-and-3 situation at midfield. Clark refused to punt. Seabolt, barking a long count in an effort to draw a penalty, planned an option play to the right but checked off and went with a naked bootleg. 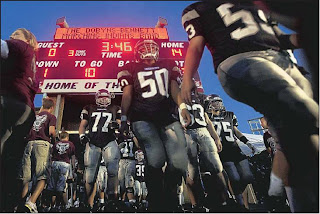 It was a gamble that paid off. He managed to get around a defender and passed to Cannon for a first down.
“I was going to keep the ball but spotted Maurice at the last second,’’ Seabolt said.
It kept the drive alive and Swafford later danced around three defenders to score on an end run covering 15 yards.
“The play was designed to go inside,’’ Swafford said, “but I saw an opening outside.’’
Seabolt had 127 tandem yards — 63 running, 64 throwing.
Leading 21-7, D-B took the life out of Farragut with a fumble recovery on the kickoff after Swafford’s touchdown. Derrick Steele got possession at the Farragut 30, setting up a 1-yard TD by Seabolt.
Posted by douglassriverview at 10:52 AM