Rebel Flag Will Continue to Fly at Sullivan South; Five New Flags Will Join It

DOUGLASS ALUMNI WEBSITE EDITOR'S NOTE: IT'S IMPORTANT TO MENTION THAT SULLIVAN SOUTH STUDENTS AND THEIR BOOSTERS HAVE BEEN ASKED BY NUMEROUS SCHOOLS THEIR TEAM PLAYS ATHLETICALLY, NOT TO BRING CONFEDERATE FLAGS ONTO THE PROPERTIES OF THE OTHER SCHOOLS THEY PLAY.


‘Nobody’s banned the (rebel) flag. What we have asked them (students) to do is try to diversify.’
— Sullivan South Principal Greg Harvey 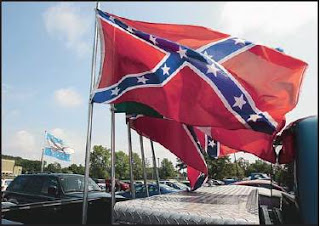 KINGSPORT — The rebel flag will continue to fly this fall during home football games at Sullivan South High School, home of the Rebels.
But it will be joined by five new school spirit flags, including the Bonny Blue, a traditional flag of the South, and four others designed with help of a South art class and produced by a Johnson City flag maker.
The principal of the school said the change is all about diversity. In response to a complaint via the Sullivan County school system’s Central Office in Blountville about rebel flags being flown during South athletic events, South Principal Greg Harvey formed a committee to look at the broader issue of school climate. Out of that committee, he said, came the idea of new school spirit flags. “Nobody’s banned the (rebel) flag. What we have asked them (students) to do is try to diversify,” Harvey said. “We want people when they come onto campus to see all kinds of flags,” Harvey said. “We designed five different flags encompassing school colors (of Columbia blue and gray),” he said Thursday.
That evening, pickup trucks on the South campus had both the rebel flags — actually the battle flag of Virginia — as well as the new spirit flags.
“I’m pleased that he’s created an excitement for the school spirit there at South,” Director of Schools Jubal Yennie said Friday.

Sophomore Jessi Holt buys a new spirit flag from parent volunteer Lynne Harvey during her lunch break at the school. 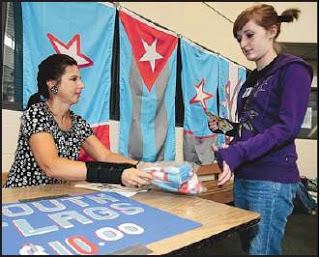 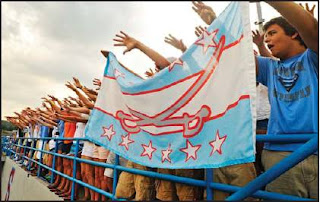 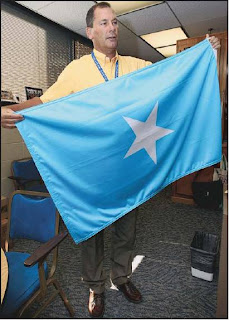 Sullivan South High School Principal Greg Harvey holds one of the five new spirit flags that are being distributed to students.

The first full-fledged flying of the flags will be Friday, Aug. 20, when South has its first regular season game with Knox West. The 2009 game of Central at Knox West was where South player Jake Logue fell ill and died from what an autopsy determined was a cardiac arrest stemming from a heart murmur.
Students under the supervision of graphics teacher Danny Arwood late last school year laid out and/or designed the flags.
The school has had an “official” school flag, but its use was limited because of the expense of producing a flag with writing on it and being able to see backward letters through the flag.
The new flags use stars, sabers and colors but no letters and cost about $20 each to produce 125, mostly 3-foot-by-5-foot ones but a few 5-foot-by-8-foot ones for use on the sidelines.
Poles for those larger flags will be the only ones allowed in the stadium during games because of safety issues.
Harvey said some students will wear the spirit flags as capes, while others will wave them in their hands.
Harvey said he gave away about 25 flags to students, and the flags went on sale Thursday for $10.
“I’m an economic genius,” Harvey quipped of selling flags that cost $20 to produce for $10.
Although Harvey said his sales model won’t win any economic awards, the spirit flags match the street price of rebel flags, and he’s hoping to get the new spirit flags in the hands of students who will display and use them.
The school and the school system paid for the flags.
Money from the sales will be rolled back into ordering more.
Jessi Holt, a 15-year-old sophomore South student from Colonial Heights, bought two flags during lunch Thursday. One showcases sabers, a symbol of South, and the other includes a large white star.
Holt said she planned to display them on her truck and use them as capes.
“I think it’s good news because not everybody agrees with one flag,” Holt said.
Harvey said the program, if successful, may evolve into every senior class helping design a new flag for use the next school year.
The spirit flags, however, are just one part of the school climate activities at South.
Harvey said administrators have been talking to all students during the first period of school about school climate issues.
In addition, South and every school in the system have an annual school climate survey. And this year at South, students are being split into focus groups of 12 to 15, led by a teacher.
That survey and the system’s school climate emphasis grew out of a 1990s agreed order settling a civil rights/racial discrimination lawsuit filed on behalf of two black students at Sullivan East High School.
The groups are to address issues and topics members suggest and are meant to give students peers and an adult to talk with about things that might be bothering them.
“We hope it will be kind of a student-led thing,” Harvey said.
He said other efforts on the school climate front include expanding Black History Month activities in February to a yearlong effort to make students more aware of different cultures, religions and backgrounds of people living in the Tri-Cities.
“I don’t think there was anything formal. There was just concern,” Yennie said, adding that he didn’t know if the complaint about the rebel flags was from a student, parent, someone from another school or the general public.
The complaint came when Jack Barnes was still director. Yennie came on board in June to replace Barnes after the Sullivan County Board of Education chose not to extend Barnes’ contract.
Harvey said he believes most of the rebel flags displayed at South are by students supporting a 30-year tradition at South, which opened in 1980, not from those looking back to the Civil War of 1860-65 or racism the flag has come to represent for some since then.
Thinking back to 1980, which long predates his eight years at the helm of the school, Harvey said it was understandable rebel flags quickly became popular at a school named South with a Confederate colonel character as its mascot.
On the other hand, Harvey said he wants to get beyond the flag issue to focus on things like ACT scores, Skills USA winners, an ROTC flying program, athletics and other activities at the school.
“The only time you see rebel flags at South High School is at football games,” he said.
Harvey said he hopes diversifying the flags displayed at the games will help change any perceptions that the flag represents anything but South school spirit.
“You can’t go through life with blinders on,” Harvey said. “Our country has always been a melting pot.”
Posted by douglassriverview at 10:11 AM