Going Back in Time: Douglass Alumni Issue Appeal for Memorabilia

Display cases in the newly renovated V.O. Dobbins Sr. Complex will feature items that recall the spirit and times of the old Douglass School and the Riverview community.


KINGSPORT — The Douglass Alumni Association (DAA) wants people to go through their attics, basements and closets and look for memorabilia they may have from their days at Douglass High School or their time in the Riverview community — the goal being to collect items for possible display in the newly renovated and expanded V.O. Dobbins Sr. Complex. 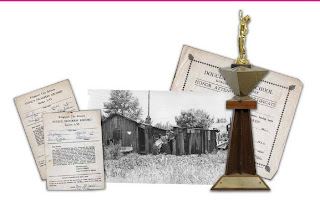 V.O. Dobbins is a city-owned community center located in the Riverview neighborhood. The building served as Kingsport’s “blacks only” school from 1951 to 1966 and was named Douglass High School.
Today, the complex is primarily home to the Upper East Tennessee Human Development Agency — a social service agency that offers programs for low-income, elderly, homeless and disabled people in the region.
A multimillion-dollar renovation and expansion project at the V.O. Dobbins Sr. Complex is winding down and a ribbon-cutting ceremony is scheduled for Sept. 24 at 4 p.m.
Calvin Sneed attended Douglass for six years before the school closed; he now lives in Chattanooga and oversees the DAA Web site (douglassalumni.blogspot.com). Sneed posted a message earlier this month asking members of the community to donate old neighborhood items for one of the three display cases at V.O. Dobbins.
Items sought include pictures of activities at Douglass, mementos such as band uniforms, football and basketball jerseys, and band instruments, sporting event programs or family and church items from the Riverview community. Sneed said the response so far has been good.
“A lot of people are looking into things, digging into closets, up in attics and family heirloom boxes,” Sneed said. “We’re looking for whatever conveys the mood and the sentiment of the community and the school. We want to share that with the rest of the community and not just Riverview.
“The idea is to take you back to the time and situation of the piece of memorabilia. If it’s a football, it may take you back to a certain game (that) was played or it may take you back to a time you may have forgotten about.”
Sneed said some of the items collected thus far include old annuals, grade cards, pictures, a doctor’s excuse and a chemistry report. The alumni association would love to have an old band uniform, football jersey or school pennant. To donate items contact Sneed at douglassriverview@ gmail.com.
The memorabilia will go in one of three trophy cases in the complex; the second will likely have rotating displays, while the third case — located in the new DAA room — will hold around 40 Douglass High School trophies from the 1940s, 1950s and 1960s. The DAA now has a space in the newly renovated building — a meeting room area located between the old building and the non-profit wing.

“We always wanted to have (the trophies) back. When I was growing up I noticed some of our trophies in the big case at Dobyns-Bennett. That’s where they were when they left Douglass. Nobody paid much attention to them until they turned up at D-B,” Sneed said.
The Douglass trophies were eventually removed from the display cases and stored in a back room in the D-B dome; during an inventory a few years ago, the trophies were rediscovered, Sneed said.
“They were in bad shape. They were dusty, some were broken and had missing parts. The bronze-colored basketball from one of the large championship trophies was missing. They had just been sitting there, out of commission for about 40 years,” Sneed said. “(Board of Education President) Wally Boyd arranged to have us take possession of them and obtained funds to have them repaired.”
The Sept. 24 ribbon-cutting ceremony will include a number of special guests and speakers, including ex-Douglass athletes, community residents and the children of Professor V.O. Dobbins Sr. — daughters Maxie and Melrose, and son Van O. Dobbins Jr. and their families. Kingsport also plans to unveil the Douglass Historical Marker from the Tennessee Historical Commission — the Model City’s 10th such marker. 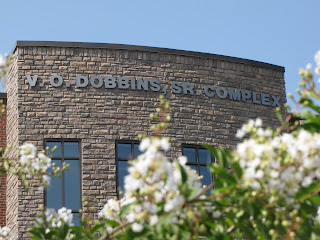 Chris McCartt, assistant to the city manager, said the total V.O. Dobbins Sr. Complex renovation and expansion project came in at $8.27 million — around $200,000 under the original cost. A $1 million Riverview community room, funded by the Kingsport Housing and Redevelopment Authority, is to be finished by October.
The original 46,000-square-foot facility received new paint, carpet and tile, windows, bathrooms and a renovated gym. Kingsport added around 50,000 square feet of space, including another gym, an education wing and three-story nonprofit wing.
Posted by douglassriverview at 10:16 AM