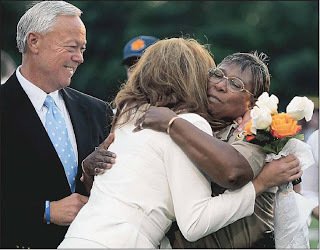 Sullivan County School Resource Officer Carolyn Gudger (left) hugs Sullivan Central High School Principal Melanie Riden prior to Central's game at Dobyns-Bennett on Friday after being honored on the field in front of the crowd at J. Fred Johnson Stadium. At left is Sheriff Wayne Anderson. The school honored Gudger and fellow Sullivan County Officers Lt. Steve Williams and Patrolman Sam Matney, below, for their swift, effective response to last Monday’s emergency, in which an armed man held Riden at gunpoint in the school until Gudger deflected him and he was shot and killed by the officers.

Posted by douglassriverview at 6:17 PM