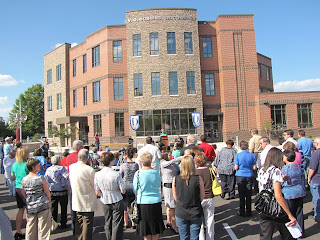 What a wonderful event.

It was a history during which the little community of Riverview was reborn with reminders and reminiscences of the past, blending in with a positive look to the future. 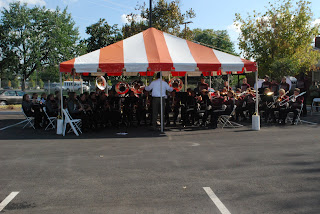 It began with historic fanfire with a musical serenade from the Dobyns-Bennett Band. In collective memory, no one can ever remember D-B's band ever appearing on the grounds of the Douglass High School. It is regrettable that years of inherited differences kept our wonderful bands apart. One thing is for sure.. our former band director, Dr. Howard Young would have been proud. 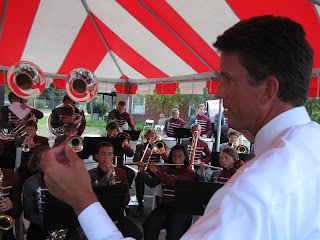 When the D-B Band played the Douglass School Song, it was the first time a D-B Band had ever played the song. It brought tears to the aged eyes of those Douglass alumni, who had not heard the song played by a high school band in 46 years. 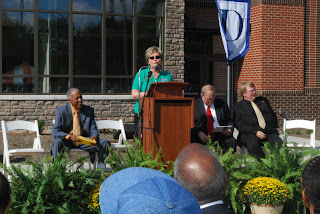 What a diverse audience welcomed by Doris Bush, outgoing leader of the United Way of Greater Kingsport. It was a cross section of Riverview, black and white, seniors and juniors, hourly blue collars and salaried white collars, indeed... a cross section of Kingsport. Included in the group were Riverview residents who were promised positive change, who have lived with the type of urban renewal that is supposed to transform neighborhoods into liveable, sustainable communities again... along with new tenants of the V.O. Dobbins Sr. Complex, excited about their new digs, and residents of Kingsport, eager to take advantage of the newest municipal builing on the block. 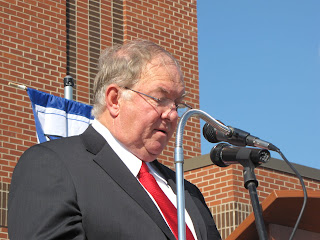 Smiles were in abundance and new fellowships were forged as the audience listened to inspired speeches by Kingsport Mayor Dennis Phillips. The mayor paid tribute to his predecessors, Mayor Jeanette Blazer and Mayor Hunter Wright, who shared the dream of building something in the Riverview Community that, after so many forgotten years, its residents could be proud of. He also acknowledged his right-hand team of City Manager John Campbell and Assistant City Manager Chris McCartt, who steadied the ship of V.O. Dobbins center renovation, and carefully guided it to a path of completion and acceptance. 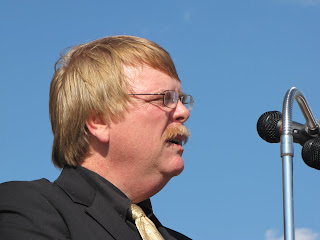 Highlighting the event were inspirational words from Dr. Carroll Van West, director of the Center for Historical Preservation at MTSU, Murfressboro. Dr. West reminded the group of the importance of restoring our state's older buildings, while keeping an eye toward the historical significance of the structures themselves. Dr. West has been a frequent visitor to Kingsport, and has even visited Riverview and the former Douglass High School itself. After touring the building, he said that God Himself had a hand in the beautiful renovation of the V.O. Dobbins Sr. Complex, and ended his speech with "God bless all of you." 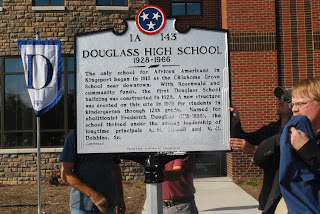 Because of his link to Tennessee's historic past, Dr. West himself unveiled the Tennessee Historical Marker that commemorates the history of Douglass High School, with several of its more significant points. The bringing up of the marker by the crew from the Tennessee Department of Transportation with specialist Michael Bare at the helm, brought ou's and ah's from the audience, many of whom had never been this close to history before. The marker was permanently mounted on a stationary pole on the Wheatley Street side of the building, and folks were urged to read the side that faces the Lincoln/MLK Street direction, then look to the back that faces the Industry Drive direction, to read the continuation of Douglass' distinguished history. 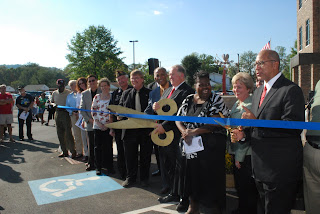 And then, the ribbon-cutting itself was the "icing on the cake." Assistant City Manager Chris McCartt representing the city, held one end of the blue ribbon, while Riverview resident Jack Pierce, representing the community, held the other, in a symbolic meeting of the City of Kingsport and the Riverview Community, while honored officials cut the ribbon to open the building.

History was made on a warm (in fact, HOT) 24th day of September, 2010, as friends, family, residents, tenants, city government officials, and even total strangers came together to welcome into being, Kingsport's latest crown jewel: The V.O. Dobbins Sr. Complex. 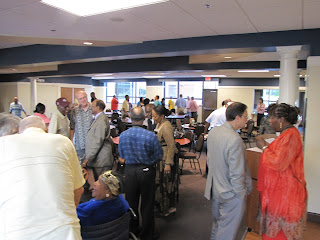 After the ribbon-cutting and marker dedication, the V.O. Dobbins, Sr. Complex was opened for tours of the individual offices and facilities.. leading up to the next big event of the day: the re-dedication of the Douglass Athletic Trophies inside their new home in the Douglass Community Room. That story is coming soon.

Riverview has been through a lot in its history, and in its 70th year, the community saw the Renaissance of its core, hopefully move back to family, faith and friendship.

Here is a slideshow of the outdoor ceremony


Created with flickr slideshow.
Posted by douglassriverview at 9:47 AM