KINGSPORT — An elixir was needed a season ago at this stage. Dobyns-Bennett found it in a decisive win over Sullivan Central.
A similar result on Friday represented more of what the Tribe faithful have grown accustomed to. These Indians have their eyes set on football’s postseason. 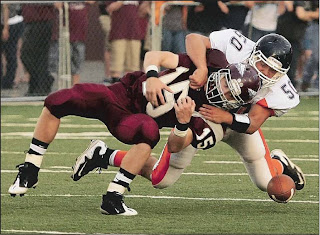 Chris Sensabaugh scored four touchdowns, including a bulldozing 63-yard jaunt on the opening play of the second half, and D-B remained perfect in 2010 with an impressive 61-7 victory against the Cougars.
“Trust me, this is much better than being 1-2,” said Indians coach Graham Clark, referring to last season’s start through three games. “The comparison is like comparing me singing country music to George Jones singing country music. “It’s a little bit different.” The Tribe (3-0, 1-0 Big 8 Conference) stuttered on its opening drive of the night — a missed field goal — but was razor sharp in the efficiency department thereafter. The Indians owned a 34-0 lead at halftime. They added 21 points in the fourth period playing mostly reserves. D-B finished with 417 yards of total offense, 323 of those coming on the ground. Sensabaugh amassed 103 yards on just nine carries. The senior back shunned four or more tackles on his signature run of the night before breaking upfield untouched to end his — and the rest of the first-team offense’s — participation early. “A couple of teammates were mad at me because we didn’t stay on the field longer,” Sensabaugh joked. “I asked them if they would rather be sitting out letting the young kids get some reps or on the field struggling. “They said they would rather let the young kids get some time, so ...” Visiting Central (0-3,0-1), meanwhile, pieced together an impressive opening 12 or so minutes, but could not maintain that level. It has been a difficult week for the Blountville school. A gunman was killed at Central on Monday morning after a lengthy standoff with school officials and police. Many of those involved in subduing the man were honored prior to Friday’s game. All received standing ovations. Clark was among those on his feet. He also expressed plenty of sympathy following the game. “It’s been a tough week for Sullivan Central,” Clark said. “A very tough week. We feel for them. “They did a great job getting us stopped early, but you have to think they were emotionally and physically spent. They’ve got to be proud of their young men — just like we are proud of ours.” The Cougars managed just 134 yards for the game, a meager 47 in the first half. Senior quarterback Taylor Winchell was not his usual self, completing 9 of 27 passes for 69 yards. He threw three interceptions — the last of which was returned for a touchdown by Sam Taylor early in the fourth. “It has been a tough week,” Central coach Jeff Fox said. “It’s been very stressful on the kids. “We’re still taking steps (as a football team). All we can do is go back to work next week.”
Posted by douglassriverview at 6:11 PM