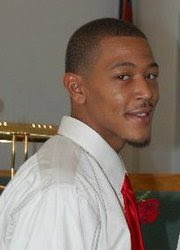 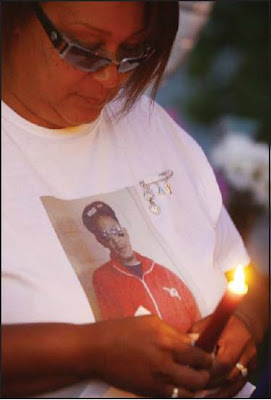 CHARLOTTE ERWIN, JARRETT HUGHES' MOTHER, HOLDS A CANDLE DURING THE VIGIL IN FRONT OF THEIR HOME AT 937 DALE STREET ON MONDAY


KINGSPORT — The sounds of neighborhood children playing, running, laughing. Smiles. Hugs. As loved ones shared their memories of Jarrett Allen “Jay” Hughes at sunset Monday, it became clear those things were a fitting preamble to a candlelight vigil held to honor the former standout in local high school athletics. Hughes, 24, died last week. Shot. Killed in his family home on Dale Street. In the middle of an afternoon. More than 100 friends, family members and neighbors, some making the point that for them, this neighborhood is one big family — a family that needs now, more than ever, to keep an eye out and prayers said for one another and each other’s children — took part in the candlelight vigil. 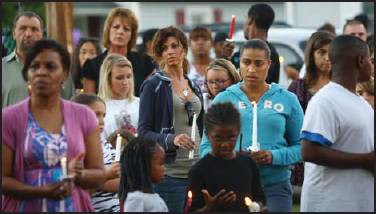 DOZENS TURNED OUT TO HONOR HUGHES


At one point, the clear and joyous voice of a child led the crowd, a cappella, in several verses of “This Little Light of Mine.”

As dozens of white balloons were released into the darkening sky “for Jay,” the heavens seemed to send back a reply: Clouds on the pink-tinged horizon at the end of Dale Street formed a perfect “J.”

Several of those who spoke during the hour-plus vigil talked of the unanswered questions about Hughes’ death, and called on the community to turn to God in prayer.

“Give him the glory,” one man said. “And we will be able to make it through anything.” 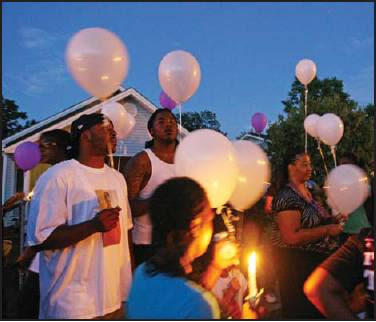 BALLOONS ARE RELEASED IN HUGHES' MEMORY


Pray for each other.

Pray for each other’s children.

And pray for justice.

“We want to know the truth,” another man said. “We want the police to find them. We want justice. Pray for the police like you never have before.” Speakers also pleaded for anyone with any bit of information about Hughes’ death to come forward or at least contact police anonymously. 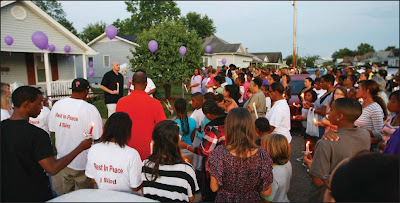 Whittemore urged the crowd to plan cookouts and other get-togethers on a regular basis as a means of keeping up with each other and being able to recognize when someone might be struggling and need some help, some love.
“We all need help and people to love us, even when we think we don’t deserve it,” Whittemore said. “Don’t let family and friends slip through the cracks.”

Johnnie Mae Swagerty said she and Lisa Williamson each thought of having a candlelight vigil to honor Hughes, comfort and show respect to his family, and bring the neighborhood together.

“God had to put it in both our minds,” Swagerty said. 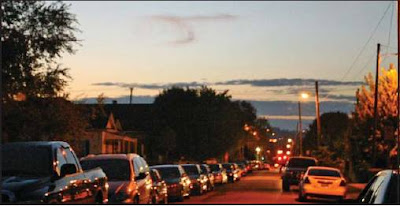 Williamson said Hughes’ death has shaken up the neighborhood — but that can be turned into a golden opportunity to reach out to one another.

“We have to pray for our young children,” Williamson said. “They’re fighting a battle they really know nothing about. People’s attitudes can change and begin to pray for each other’s children and begin to love one another again as a community.”

Posted by douglassriverview at 11:31 AM