"IT'S BEEN A LONG TIME COMING.. MANY POTENTIAL DONORS DON'T EVEN KNOW WE ARE HERE."

IF THE NON-PROFIT APPLICATION IS APPROVED, PUBLIC AND PRIVATE CONTRIBUTIONS AND DONATIONS TO THE DOUGLASS ALUMNI ASSOCIATION BY COMPANIES, BUSINESSES AND PERSONS WILL BE TAX-DEDUCTABLE

The process for getting tax-exempt status for the non-profit Douglass Alumni Association is right on track, and is right now, in the middle of the filing procedure. 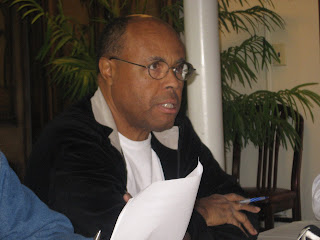 "It is not an easy process," says Ed Horton, who filed the tax-exempt application on behalf of the Douglass Alumni Board of Directors. "The Internal Revenue Service wants to make it as difficult as possible, to weed out fraudulent applications from shysters who seek to cheat the government."

Work on the Douglass Alumni Association filing is being done in conjunction with the Kingsport Chamber of Commerce. "There is an office in that agency that lends its expertise in making sure the non-profit application is as legitimate as the organization itself," says Mr. Horton. He says the Chamber's Aundrea Wilcox provided the Association with the kit of papers to fill out, and is walking the organization through the process right now, to make sure all the "I's" are dotted, and the "T's" are crossed. "Her help is invaluable to the process," Mr. Horton says, "and she really believes as we all do, in the Douglass Alumni Association's purpose."

"Depending on the final decision, the tax-free status will either be classified as a 501(c)3 or a 501(c)7," says Dan Boone of the IRS office in Nashville that serves all of Tennessee and Alabama. "The non-profit classification will depend on several factors that the Douglass Alumni Association will have to meet."

"Ours will mostly likely be a 501(c)3 filing," says Mr. Horton, "because that classification more closely reflects the charity that our organization is. We are not a public foundation a (c)7 would have, that follows the standards an organization has, that would fund, say the construction of a building for public use."

Mr. Horton says it's important for the Association to have the tax-exempt status to accept charitable donations from potential donors, for several reasons:

1) The Douglass Alumni Association is always involved in fundraising for its reunion every other year.

2) The Douglass Alumni Association also raises money for charitable functions and contributes to several outstanding events from time to time.

3) The tax-exempt status establishes a way for legitimate contributors within the Kingsport business and industrial community to participate in our cause.

4) The tax-exempt status also establishes the Douglass Alumni Association as a "legitimate" organization. Corporate contributors can feel comfortable knowing that their contributions and donations are going to be used by a government-recognized association.

Also part of the application process, is the submission of the Association's Articles of Organization, including bylaws, rules and regulations that dictate how the agency is run. Amendments that include the Election of Officers, whether they are paid officers, allocations for however funds are spent, as governed by Roberts Rules of Order, also have to be spelled out.

"Since our officers are volunteers and receive no compensation, our petition will be considered differently than others," says Mr. Horton. There is also a 100 dollar fee to be paid to the I.R.S., along with the petition, that will come out of the Douglass Alumni Association treasury.

Most alumni associations are operated with schools and universities that are still in operation, and Mr. Horton says, the fact that Douglass High School has been closed for 41 years, but still has a very active Alumni Association, also plays a role in the application process.

"What moves the process along," says Mr. Boone, "is whether all the tax-exempt forms are filled out correctly, whether they are accurate and can be backed up with the right paperwork, and the workload of the IRS Center at the time of the filing. If everything checks out, it usually takes from four to five months to process a non-profit's 501(c)3 or (c)7 application."

"Corporate Kingsport, as well as private donors can feel confident their money is going for a good use, when they contribute to the non-profit Douglass Alumni Association," Mr. Horton says. "We have excellent turnouts at the events we've involved in, including fish fries, reunions, scholarships for deserving youth, community fairs and festivals, concerts, talent shows, and Black History Month activities.. we have an active mailing list of past alumni and their descendants, plus we have a wonderful website that not only chronicles the history of the school, but keeps everybody in touch at a moment's notice with news of the Association and the community."

The Douglass Alumni Association officers for 2007-2009 are Douglass Releford, president, and Andra (Puddin) Waterson is the Vice President of the Association.
Other officers are Sandy Wilmer, Treasurer, and Recording Secretary is Thelma Watterson. Corresponding Secretary is Vicky Woods Smith, and Ethel Ruth Russell is the Association Chaplain. Although not an officer, Calvin Sneed hosts and operates the Douglass Association's website www.sonsanddaughtersofdouglass.org for alumni and the residents of Riverview and South Central Kingsport. 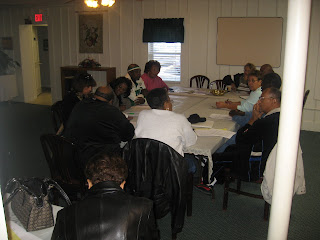 SPECIAL NOTE: The Douglass Alumni Board of Directors met, in accordance with parlimentary procedure on Saturday, November 24th, to talk about the non-profit filing, and after discussion, it was voted to withdraw 100 dollars from the Association's treasury to use for the required tax-exempt filing fee to be paid to the State of Tennessee. We will keep you posted when the filing is made, and the decision from the I.R.S. when it is received.
Posted by douglassriverview at 11:38 AM