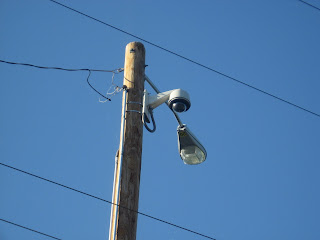 Kingsport installed cameras in the Riverview community last year in an effort to curb drug trafficking. As a result, police say, criminal activity has spilled over into other neighborhoods.
Our most important tool is the citizens that decide to live in a safe community and are willing to work with us to make it safe.

KINGSPORT — The Kingsport Police Department is looking to build relationships with the residents of Borden Village and Highland in an effort to fight the growing drug-trafficking problem in both communities.
Police Chief Gale Osborne updated the Board of Mayor and Aldermen last week about conversations the department has recently had with the residents of Borden about the drug problem in their neighborhood. About a dozen residents from that neighborhood attended the BMA meeting.
“We invited (some concerned citizens) down to a community meeting last month so we could communicate,” Osborne said. “I brought my staff in to meet with the residents, then we just shared with them all we could do, what they could do, and work on the problem together. They just want to live in peace, in a drug-free neighborhood.”
Last year Kingsport installed cameras in the Riverview community in an effort to curb drug trafficking. The cameras — coupled with trash collection work by volunteers and an increased police presence — managed to reduce criminal activity in the neighborhood.
However, as a result Osborne said criminal activity has spilled over into other neighborhoods, such as Borden and Highland.
During last week’s BMA meeting, Osborne said drug-related arrests in Borden have increased 30 percent over last year — 38 people have been arrested in Borden with more than 90 charges. In Highland, 46 people have been arrested with more than 100 charges.
Osborne said the department expected some overflow into other neighborhoods.
“People will leave town and others will relocate. There’s always some who may end up in jail and some may get out and start again,” Osborne said. “We’ve been successful in Riverview with the cameras, the partnerships, and high-profile and undercover operations, but we did see some overflow of the activities that left South Central.”
During last week’s BMA meeting, Mayor Dennis Phillips asked if the city should work toward installing cameras in the Borden and Highland neighborhoods.
Osborne said the cameras were truly effective, like turning on a light switch. Later in the week, Osborne said the flexibility of cameras allows the city to place them in a cruiser or in a hot spot for a week, a couple of months or longer.
Phillips said his goal is to get cameras in all areas of the city where needed, suggesting money received from red light camera tickets could be used to purchase additional security cameras such as the ones found in Riverview.
City Manager John Campbell said Osborne already has that in motion.
“If you want to give us the money and power to do something, put it toward getting more people,” said Tony Queen, a resident of the Borden community who attended last week’s BMA meeting. Vice Mayor Ben Mallicote said neighborhood watch coordinator
he was concerned with the pro- of the Borden community, told the posal to respond to these neigh- BMA last week that some resiborhood concerns with more cameras.
“When we put cameras in Riverview, that was a unique response to a unique problem. When you put cameras in other neighborhoods, you’re shining a light into these folks’ front yards where people have a reasonable expectation of privacy,” Mallicote said. “My inner libertarian has a problem with that. It bothers me if cameras are a first resort.”
Osborne said the best way to address the neighborhood concerns is through a partnership with the residents.
“A partnership is the best, if the community would be our eyes and ears and give us a call,” Osborne said. “There’s community policing and other tactics as well to eradicate the drug problems, but our most important tool is the citizens that decide to live in a safe community and are willing to work with us to make it safe.”
Mike Creasman, a resident and dents have begun to organize. He said they have the phone number of police officials and are making calls, reporting specific addresses for the police to pay attention to.
“When we report information, they are responding, and we’re willing to help them keep an eye on this and run them out of the neighborhood,” Creasman said.
Osborne said the Borden residents have done an excellent job and hope their efforts expand. Osborne said the department has not had a community meeting with the residents of Highland, but officers do have daily contacts with the residents who are sharing information about criminal activity.
“More people are getting involved to work on the problem together. We’re thankful for that as well,” Osborne said. “It’s always better when we have many people, eyes and ears, who are reporting it and working together to keep (the neighborhood) safe.”
Posted by douglassriverview at 12:39 PM