Transformation of Riverview site ‘progressing well’
16 single-family houses and eight duplexes are going up on the old Riverview Apartments site.


KINGSPORT — The transformation of the old Riverview Apartments site is “progressing well,” with two houses expected to be completed in the next six weeks and occupancy beginning in May.

Erica Yoon —eyoon@timesnews.net
As part of the city’s HOPE VI project, 16 single-family houses and eight duplexes are being built on the old Riverview Apartments site.

To see a slide show of the HOPE VI homes from February, please click here.

Two years ago, the city of Kingsport demolished the old Riverview Apartments complex with plans to replace the aging public housing facility with new, single-family houses and duplexes.
The work was the beginning of one phase of the city’s HOPE VI project — a $30 million redevelopment of two distressed city neighborhoods. The first phase replaced 29 houses along Sherwood and Hiwassee with 24 new, affordable homes, while the second phase calls for 32 rental houses and duplexes built on the old Riverview Apartments site and six additional houses built in the Riverview community. 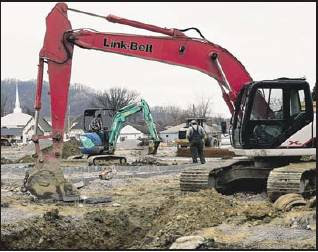 Below center, workers with ABC (subcontracted by Armstrong Construction of Kingsport) put a roof on one of the two single-family houses nearing completion at the old Riverview Apartments site. At right, crews dig trenches to install storm drains at the site. At bottom right, Larry Catron, Matthew Sanders and Jerry Jones with Armstrong Construction work on the foundation of a house. 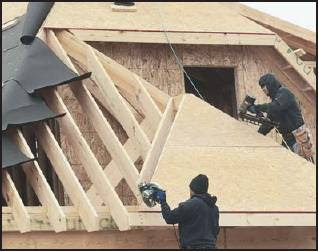 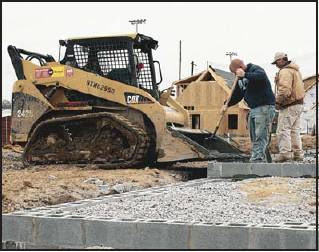 Doris Ladd, director of the HOPE VI project, said the Riverview phase of the project is at about the 30 percent completion mark. Armstrong Construction of Kingsport is performing the work.
“That’s a rough guess, but I think the houses are progressing very well,” Ladd said.
Sixteen single-family houses and eight duplexes are going up on the old Riverview site, along with six off-site houses — all of which will be public housing rental units. The houses are in the same model as those built along Sherwood and Hiwassee, with the houses being three bedroom/two bath and the duplexes being two bedroom/two bath. 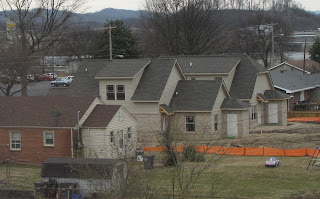 The first two houses on Wheatly Street will probably be completed in the next 45 days. All of the six off-site houses are under construction, and the walls are up on the eight duplexes.
Ladd said the Kingsport Housing and Redevelopment Authority (KHRA) is hoping to begin some occupancy in May, with all of the units completed by December.
The rental units are first being offered to the original residents of Riverview who have expressed an interest in returning, then to other families in the KHRA’s self-sufficiency program and in other public housing/Section 8 units.
KHRA staff are working with former residents to get them qualified to come back, noting 90 households have expressed an interest in the rental units — 40 of whom are prior residents of Riverview. Seventeen residents have qualified for the new units.
“We have a good cross section of original residents as well as individuals who are working toward self-sufficiency, and all are meeting the requirements,” said Maria Catron, the HOPE VI Community Support Services coordinator. “And we’re still working with (other) folks to help them become eligible.”
More than three years ago, Kingsport received an $11.9 million HOPE VI revitalization grant from the U.S. Department of Housing and Urban Development to go toward the total HOPE VI project in Kingsport.
The cost of phase two is approximately $8.5 million — $4 million in HOPE VI dollars, $4 million in low-income housing tax credit dollars from the Tennessee Housing Development Association, and a $380,000 federal home loan bank grant. 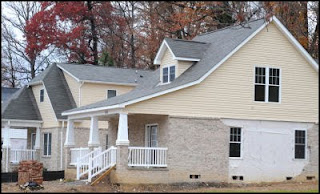 At the same time these units are under construction, work to repair all of the homes along Sherwood and Hiwassee is wrapping up, Ladd said. Last year, city officials and the development company on the project (Cornerstone Housing of Maryland) discovered a series of problems with the 24 houses along Sherwood and Hiwassee — poor masonry work, drainage issues, and problems with the concrete steps and driveways.
Since then, Cornerstone Housing brought on a new construction company to remedy the problems, including re-bricking every home and repairing the concrete. Kingsport installed sump pumps under every house (even though only four had drainage issues) and installed a French drain along Hiwassee.
Ladd said repairs to the final house were being done last week, and the new construction company — Landmark Construction of Johnson City — will be cleaning up for the next 45 to 60 days, depending on weather.
“I’d like to think by the end of April they’ll be out of there with everything,” Ladd said, noting 20 of the houses have residents, with the remaining four being under contract.
After the debacle with the Sherwood and Hiwassee homes, the KHRA has secured a different inspection company for the Riverview units, a company out of Greeneville, Ladd said.
Posted by douglassriverview at 11:23 AM