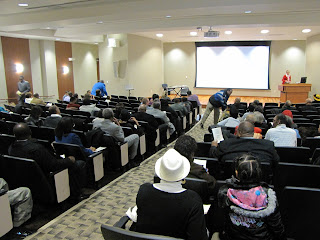 The communities of Kingsport came together on the last day of February, to commemorate the 15th Annual "Community Unity" Celebration.

The event at the new Kingsport Center for Higher Education, also celebrates the historic end to the celebration of Black History Month in the city. 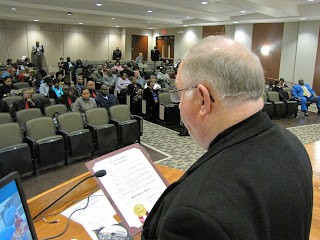 "I'm glad to see us in this building, the build that you built," Kingsport Mayor Dennis Phillips told the group, as the Center hosted its first major event. "This building would have never been possible without the people of Kingsport. Thank you for allowing the Board of Mayor and Aldermen, so that we could have this building for this event and others, and for the education of students who come here to learn."

Mayor Phillips then read a proclamation from the city, proclaiming February as Black History Month, asking every resident to thank the African-Americans in Kingsport, for their contributions to the community and the nation.

To see a slideshow of the 2010 Community Unity celebration, please click here.

Your Douglass Website photographer took plenty of them, so please be patient. Those blurred, reflect rapidly moving targets.

The event began with an invocation by Reverend Charles Hawkins of the Bethel AME Zion Church of Kingsport, and the traditional singing of the Negro National Anthem "Lift Ev'ry Voice and Sing." Mrs. Louetta Hall, Chairperson of South Central Kingsport Development, Incorporated's Board of Directors, welcomed the audience to the celebration, and after remarks by the mayor and Mrs. Kathy Thacker, the Center's director, the program began. 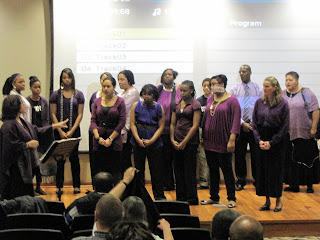 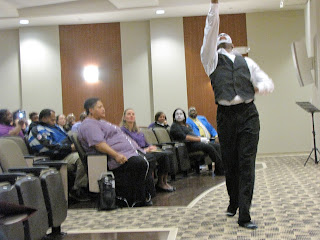 The Full Gospel Mission #2 Gospel Choir stirred the audience, and Johnson City's Jordan Carson did an religious interpretive dance and both inspired and mesmerized the group. 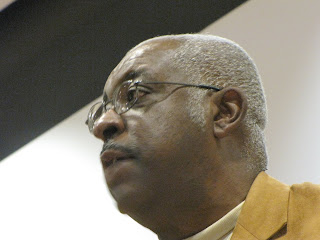 The spoken word was delivered by Mr. Ralph Davis of the Johnson City-Washington County NAACP. He posed the question to the group "do we really know how far we have come? From the first Africans who rode over on ships, with their countrymen dying in the hold of the ships right next to them," he said, "and then pulled apart from their mothers, fathers, children, siblings."

Mr. Davis told the audience that he could remember the separate restrooms, the segregated schools, the lower-paying jobs for blacks doing the same work as whites."

He challenged the youth of today to find an elder that remembers those times, and to learn from their experience. 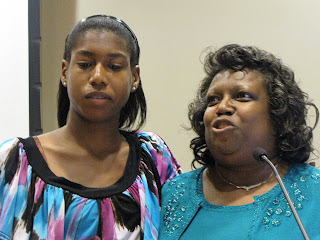 The 2010 Community Unity Scholarship Winner was then announced by Mrs. Linda Calvert. Ms. Sydney Edwards, a senior at Dobyns-Bennett High School was awarded a $2,000 dollar scholarship. Cyndee is the daughter of Angie Edwards, the granddaughter of Douglass Alumnus Sylvia Ann Davis, and the great-greaddaughter of "Mama Jean" Clark of Kingsport.

Sydney plans to attend the University of Tennessee-Knoxville, to major in biochemistry. She's a member of the Central Baptist Church. 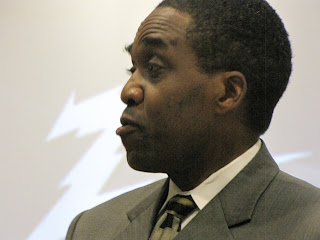 Reverend Kenneth Calvert of the Shiloh Baptist Church announced this year's winner of the Outstanding Service Award. In February, 1999, this year's recipient saw that private funds were taken, public funds did not exist, but an hour of need went forward. One person, he said, went forward so that those who needed the inspiration, kept receiving it. Pastor Calvert said that it didn't matter what ethnicity they were, what neighborhood they came from.. the only idea was, that if one needed to be fed, they could come and be fed. 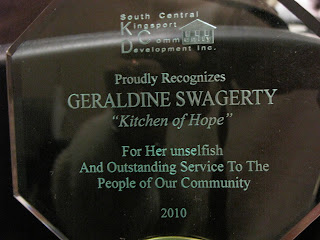 With that, Pastor Geraldine Swagerty of the Full Gospel Church and director of the Community Kitchen was presented the 2010 Community Unity Outstanding Service Award. Johnnie Mae Swaggerty, Pastor Swagerty's daughter, accepted on behalf of her mother, who could not attend the gathering. 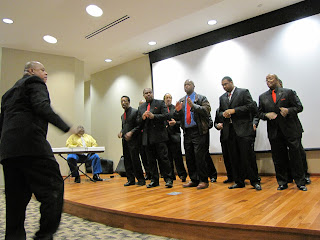 The Revelation Men's Choir lended a couple of musical selections to the celebration, and their rousing renditions stirred the audience to several inspirational levels. It was just good, ole-timey gospel music, that folks used to hear in church growing up.

Also, there was praise dancing from several groups for the celebration. 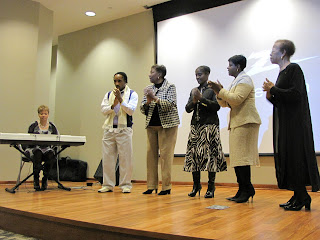 The Celebration of Praise Choir from Central Baptist also lent their voices to the gathering, inspirational that the word "celebration" is in their name, as well as the Community Unity goal to celebrate Black History Month by bringing together neighborhoods. 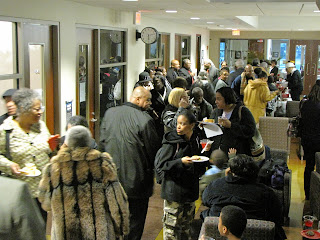 A reception followed in the lobby, after the benediction by Central's Reverent Ricardo Dorcean.