‘Hope’ was found at 225 Dunbar St. with bones protruding, a chain embedded in her neck and no strength to stand.


KINGSPORT — A female hound named “Hope” was found at an abandoned Kingsport house Thursday with a chain embedded in her neck and no strength to stand. 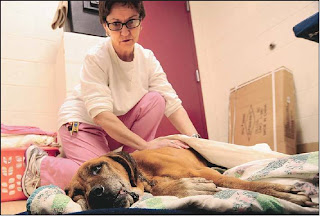 An animal cruelty investigation has been launched into the discovery, said Kingsport Animal Shelter supervisor Donna Davidson. Hope was found at 225 Dunbar Street in Riverview.
“The strange thing about this is a perfectly healthy dog was found on the front porch. (Hope) was found in the back,” said Davidson. “It looks to us like someone was taking care of the one dog and left the female to die. About every bone in her body was protruding out. It looks like she’s been this way for weeks, maybe months.
“We took her to the shelter and were able to remove the chain from her neck, but we have her scheduled for the veterinarian’s office. She’ll probably have to be there for several days because she is in bad shape, but she should pull through.”
Davidson said the animal control officer reported that the house was abandoned, and the investigation is ongoing.
Hope, estimated by Davidson to be 10 to 12 years old, also has two severe ear infections and will need a home once she fully recovers from her ordeal.
“We see too many of these cases, and we want to see every dog and cat adopted. But I think Hope deserves to live out her final years with somebody who can care for her and enjoy her. She deserves that after being put through this,” said Davidson.
Anyone with information regarding this case can contact the Kingsport Animal Shelter at 247-1671.
Posted by douglassriverview at 10:58 AM