If you ever wanted to connect with the number one aspect of African culture, both mainstream and ancestorial, all you have to do is pick up one item. 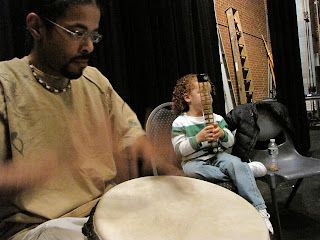 "Everybody has a rhythm," says Richie Hicks of Kingsport, who has been teaching the African art of drumming for years. We caught up with Ritchie during a drumming workshop at Kingsport's Renaissance Center for Black History Month 2010.

Click here to see a slideshow of Richie's drumming workshop.

"Everybody has a beat that defines them," he says. "It's an inner thing, something that goes right down to the heartbeat, which, itself has a beat. The beat defines the person. Tune in to it sometimes, and you'd be surprised. Feel the pulse of your heartbeat and you'll hear and feel the pulse of a specific beat. Your own rhythm just goes from there and stretches out all over the universe."

"It's something unique just to you." 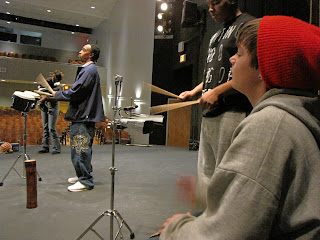 Richie says, drumming is the extention of a person's natural rhythm, and the African tribes of our ancestors discovered that, first.

"Most drum beats are West African in nature," he says. "The West Coast, the Congo.. those areas. Many tribes had languages all to themselves that nobody else understood but them, so when it came to communicating with other tribes, that's where the drums came in. Drumming was, and still is, in some cases, the promary form of communication between people, between tribes, between communities and between cultures." 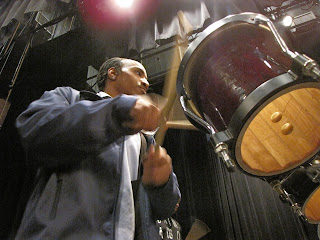 "It's almost a spiritual cleansing, that gets out your passions and aggressions."

Both kids and grownups learn something from drumming. 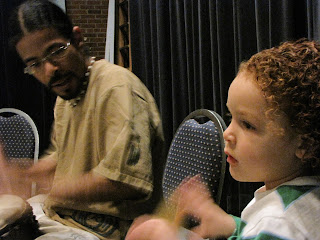 "The kids love it because number one, they get to make noise," Richie laughs. "Number Two, they get to hit things. But this way, it comes with a rhythm and a beat that means something. The grownups are taken back to that tribal time when this was the only way for our people to communicate."

He says, just look to your own heartbeat.

"Drumming brings out the need to communicate, and that gives the heartbeat a soul."
Posted by douglassriverview at 1:39 AM