KINGSPORT — It’s a potential problem facing business and industry across the country: Finding enough qualified workers with the skills to replace hundreds of thousands of retiring baby boomers in the next few years.
Now two manufacturers in Kingsport are working together to help make sure they and other industries in the region have the skilled work force they need for the future. 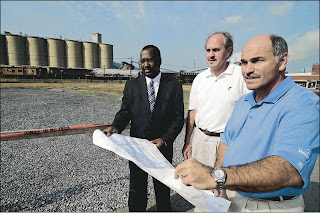 The Domtar paper mill and Eastman Chemical Co. have partnered with Northeast State Community College to establish the Regional Center for Applied Manufacturing in downtown Kingsport.
The concept for the training facility stems back several years ago, when the downtown paper mill, which was under Weyerhaeuser’s ownership at the time, recognized the need to help make sure it had a future supply of qualified workers.
“What we were experiencing was the task of preparing to replace a number of upcoming retirements in our maintenance work force, so we began to re-look at our maintenance apprenticeship training program,” said mill Manager Charlie Floyd.
He said the company decided to partner with Northeast State to offer class curriculum coupled with on-the-job training. Classes began in 2004 in a 3,000-square-foot building at the corner of the paper mill property. Employees in the apprenticeship program could work during the day and attend classes at night.
Eastman officials took notice and began sending some of their employees for training at the site as well.
Within a year or so, the small training facility “was bursting at the seams,” Floyd said.
At the same time, a mayor’s task force was established to redefine the downtown area. Floyd was part of that task force, and noted that education became a major focus of redevelopment with plans for a higher education center just across the street from the mill.
“We said, okay, if we’re conducting all of this training right here at the corner of the mill site, and the higher education center is going to be constructed right across the street under Northeast State’s eventual leadership, it all just fits naturally together that we would need a larger, more modern facility that could be constructed in this vicinity and become a natural part of the higher education concept,” Floyd said.
Today, plans are being finalized for the Regional Center for Applied Manufacturing — or RCAM for short. The old training facility has been razed to make room for the new, and Domtar has donated the land for the project. The 26,000-square-foot building will cost about $2.7 million.
Laurey Conway, training associate at Eastman, said her company has received $15 million from the state for work force development. That money was part of Eastman’s Project Reinvest, a $1.3 billion plan to upgrade the Kingsport manufacturing complex. Conway said Eastman plans to use part of the $15 million work force development grant to fund construction of the new RCAM. Goins Rash Cain has been named contractor for the project.
The RCAM will also receive $1.9 million from the U.S. Department of Labor to pay for building equipment and scholarships.
And Eastman is also providing scholarship monies. Paul Montgomery, vice president of talent management at Eastman, said the company has established a new scholarship fund through Northeast State’s Foundation. The new Eastman Chemical Company Workforce Development Scholarship is designed to assist adult students who enroll in selected programs of study such as machine tool, welding and metal fabrication, electromechanical technology, and chemical process operations.
This fall semester, Eastman awarded about 70 students nearly $650 each to attend classes through the program. Until construction of the RCAM is completed, classes will held at the old Quebecor building, which is now owned by the city.
A groundbreaking for the RCAM is expected to take place in October signaling the start of construction. The building is scheduled to be completed in time for fall classes next year.
Meanwhile, the property will be deeded to the Kingsport Economic Development Board. Once construction of the RCAM is completed, the property and building will be deeded from KEDB to the Northeast State Community College Foundation.
The RCAM, the Regional Center for Higher Education, the Regional Center for Health Professions at Kingsport and the Regional Center for Applied Technology will make up Kingsport’s new Academic Village, an educational complex designed to train students in various fields to ensure a ready supply of highly qualified employees for area businesses.
Bill Locke, president of Northeast State Community College, said the RCAM project will be the college’s first off-campus facility where manufacturing skills are taught.
“And it’s training for the kind of jobs that many of the major industries are saying they need — those highly skilled technicians,” Locke said.
“So it’s going to be a great thing for not only filling the work force with new employees, but training the old employees who are there but who need to upgrade their skills,” he said.
“And certainly all that will play a part in enticing new businesses and industries to locate here, because what we’ll end up with is a qualified work force,” Locke added.
Floyd said he was involved in a similar training initiative in South Carolina in the late 1980s. That effort was used as an incentive for businesses to locate there.
“We were able to attract new industry by offering up entry level training programs for any new industry that came in as an incentive. And that’s what I think is going to be one of the goals of this facility — to convince some who may want to locate manufacturing or industry into this area,” Floyd said.
“That’s going to be a huge tool.”
Montgomery said Eastman hopes that the RCAM will serve as an anchor for a broad-based approach for education and training in high-tech manufacturing skills, which will serve as a benchmark for manufacturing jobs of the future.
“Eastman has had a long history of supporting education in our region, and the RCAM goes nicely with what we do as a company regionally. And the RCAM will get more students trained to be prepared as part of the highly skilled work force that we need going forward,” Montgomery said.
Folks interested in signing up for classes at the RCAM can register through Northeast State Community College. For more information, visit Northeast State online at http://www.nstcc.cc.tn.us/.
Posted by douglassriverview at 9:09 PM