PICTURES FROM THE RUDY HALL MEMORIAL GOLF TOURNAMENT, INCLUDING THE WINNERS ARE IN THE PHOTO GALLERY

"This is the 7th year for the tournament," says Reverend Kenneth Calvert, co-coordinator of the event, and spokesman for the sponsor, the South Central Kingsport Development Corporation. "It's a good time to bring together golfers of all types, to test their skills and raise money for a good cause."

The money raised from entry fees goes to fund scholarships awarded by the SCKDC every year to deserving students. "Generally, we have 20 to 25 players every year, and historically, we've raised from 7 to 8 thousand dollars for scholarships. Some years we have corporate sponsors, and we tie everything in with the South Central Kingsport banner."

The tournament is named after famed local golfer Rudy Hall, who passed away in 2002. At one time, Rudy was the manager of Kingsport's Solid Waste Treatment Plant, but always found the time to play golf, and at the same time as a black golfer, raised the standard for everyone. "He dearly loved the game," says Hall's wife Louetta. "He dreamed it, sleeped, loved it. He played all the courses in this area, and even traveled to different states to play in tournaments."


We give out the scholarship every year during Black History Month, the last Sunday in February," says Reverend Calvert. "So far, South Central has given out 12 scholarships, and many students who have received the money have since graduated and moved on to better things. As long as they keep at least a C+ average, the scholarship is good until they finish their degree."


The tournament in Rudy Hall's memory, is open to any golfers every year. "Anybody who can hit that little white ball as far as they can, can talk part," says Reverend Calvert. 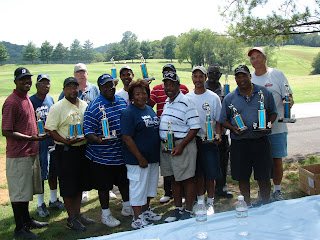 "The fellowship is the main thing," says Louetta Hall. "The guys coming together, trying to outplay each other and finding out how skillful their game is, gives the opportunity to get together to play golf, have a good time, and raise money all at the same time"
Posted by douglassriverview at 9:10 PM