Dr. Junius Griffin was an author, a national newsman, confidant and close friend to the Reverend Dr. Martin Luther King, Jr, and at one time, public relations manager for one of the hottest record labels in the world.

The Southwest Virginia native was also father to several children, some of whom say, really wanted to know him better. 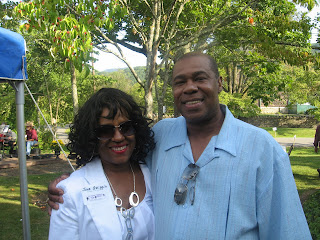 In the PHOTO GALLERY, his daughter June Griffin comes to the Southwest Virginia Museum in Big Stone Gap, to accept an award for Dr. Griffin's induction into the museum's Walk of Fame, and she speaks candidly about the father she met at 24, and spent the rest of his life, getting to know him.

It is a moving interview about the importance of family, forgiveness, and coming to grips with the sacrifices that are sometimes made for the sake of children.

NOTE: You'll need the Adobe Flash Player to see the video, and remember.. don't move your mouse while the video is playing.
Posted by douglassriverview at 6:35 PM