Joni Howard at the Inauguration: "Barack is Devoted to his Wife and Kids"

"You could tell whenever they showed him on TV, that he's totally devoted to his wife and children."

Riverview resident Joni Howard says, just seeing how loving Barack and Michelle Obama were at the Inauguration, that they will serve as a good role model for black families everywhere. 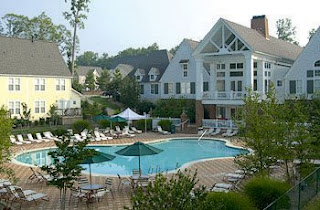 All Black families bonded together as friends during the week of the Inauguration. It was the culmination of a whirlwind trip to our nation's capitol for Joni and her tour group during Inauguration Week. "We had a ball," she says. "We had 29 people on the bus, the majority of them from Nashville, and the rest was family. We stayed in Williamsburg, Virginia at the Kings Creek Plantation; it's like a resort-estate-timeshare. It was really nice and so were the people. It had a kitchen, washer-dryer. We had a man with us who knew how to cook, and the first day we were there, he cooked tilapia, whiting, red beans and rice.. we ate and got full. Denise (Horton) baked a cake and we brought it with us. My mother and my aunt Dottie came with us, but they stayed behind because of all that walking they'd have had to do in the cold weather in Washington." 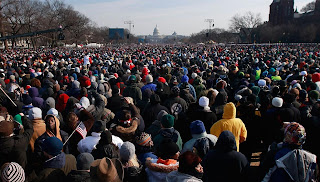 On the day of the inauguration itself, "we bundled up and Lord have mercy, we walked and walked and we just found us a spot over by the Washington Monument," Joni laughed, "and just filed in with all the rest of the, looked like a million people that were there. We could see everything happening at the Capitol off in the distance. We watched it and we were just screaming and hollering and shouting, people were crying. It was just wonderful, a wonderful feeling."

"That he got in there, and won it is still unbelievable," Joni says. "Barack Obama, president, African-American. I never dreamed in my lifetime that I would see that. Never, ever dreamed that. I know that all people want him to succeed, blacks and whites together." 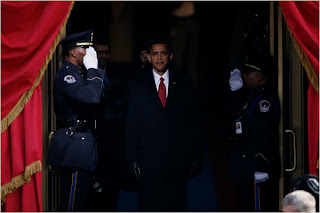 "I told people from the beginning, that God's gonna put in there who HE wants," says Joni. "When I said my prayers, I said 'Lord.. send us the president that YOU want us to have. And he sent Barack, because I believe he has a plan for Barack. I believe He has a plan for our President, our first African-American president. He can'tdo it by himself.. he's got to have people walking with him. He can't make the decisions by himself without Congress. Black America didn't elect him by themselves, there's not enough of us. White Americans actually put him in, because there is something about him that they like."

Maybe it was the loving way the Obama's are with each other and the family way that they are with their children, that won over White America, as well as most other voting bloc's in the country. It was most evident on Inauguration Day, says Joni. 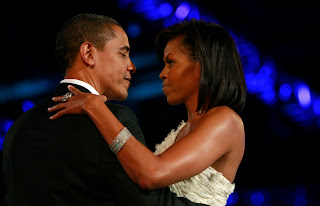 "When they were dancing," she says, "you could tell they are a loving couple. That way he would look at her, and she would look at him.. that loving look that says 'no matter what.. I will always be right here by your side, and she's gonna be by his. He's gonna be right there, helping him. It sends a big message, especially to the Black community Calvin, that people would look at them and say 'well that's the way I want my marriage to be.' Even though they are two different people, two different personalities, they make it work. From what we've seen.. loving each other, gonna take care of each other, gonna be there for each other, united as one. I think Black people are going to look at that and say 'Yes, we can. We can do this, too.. we, too can have this loving, nurturing husband-wife relationship.' 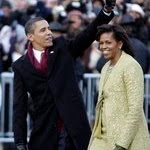 Joni says, it doesn't stop there.

"Black children can also look at the Obama's mother-father relationship and think, 'oh yes.. yes I can.. I can do that, too."
Posted by douglassriverview at 5:14 PM