Moving Forward by Remembering the Past: "The Last Great Program at Douglass"

Rain threatened to keep the enthusiam down, but it was, without a doubt, one of the largest programs held in the Douglass Auditorium since the largest African-American school in the area closed over 40 years ago. 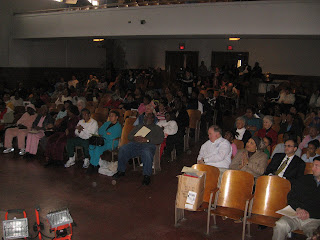 The theme of the event was "It's Going Down, But We Are Upward Bound" (coined by Johnnie Mae Swagerty), a reminder that Kingsport plans to tear the Auditorium down to make way for a three-story office tower to house the city's non-profit agencies.

"We have come a long way in this building," noted Mrs. Eula Cartwright, who raised many children who attended and graduated from Douglass, "but if it's good for the neighborhood, you have to move forward."

From the opening welcome from Douglass Alumni President Doug Releford, prayer by Shiloh Baptist Pastor Kenneth Calvert, the audience got into the "spirit" of things with Scriptures from the Word from Kingsport Alderman and Reverend Larry Munsey reading from the Holy Bible. 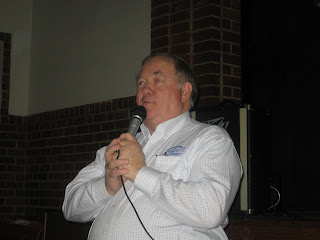 Kingsport Mayor Dennis Phillips told the group of his hopes of being the first city or town in Tennessee to have all of its non-profit agencies under one roof. "Too often," he said, "people have to travel from one non-profit to another as they get referred from one to the other, and the one-stop non-profit center in one location will no doubt improve services to everybody." 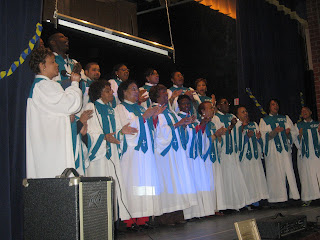 Music was in abundance at the event, much like it was during the days of the Douglass Choruses. As the Central Baptist Choir brought the audience to its feet with a soulful Gospel song, everyone was reminded of how acoustically perfect the Douglass Auditorium is. Although asbestos is a life-threatening danger to anyone who inhales its dust over a long period of time, it is no secret that asbestos is one of the best soundproofing materials ever placed inside walls. As a result, neither songs nor the spoken voice echoed between the walls of the Auditorium during the program.. every word was heard, and even most low voices were picked up midway and to the back of the room. 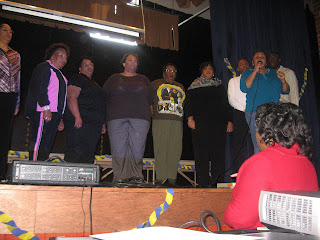 The Shiloh Baptist Choir held the audience spellbound, with a wonderful song from the Gospel. Its faithful members were a good reminder that every really good singer that has ever made it big out of Douglass, reached their vocal range capabilities in the Riverview Neighborhood church choirs over the years. They all started their singing careers there. 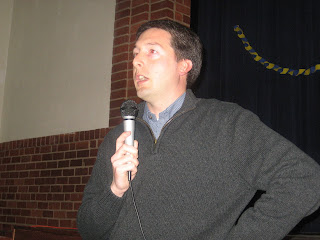 Assistant City Manager Chris McCartt spoke to the audience about the future of the building renovations, and the wonderful offices that are to be built. He also reminded the crowd that the Douglass Alumni Association will have its offices and computers in the neighborhood "Community Room," an open-air space that will serve as a gathering place for community meetings and programs. Architectual photos were also exhibited for folks to see what the newly renovated building will look like. 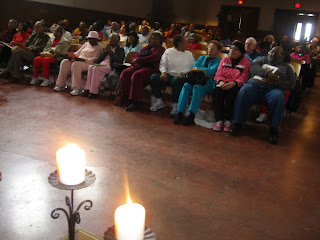 A special surprise brought the audience to its feet for a standing ovation, when two of our community seniors made appearances. Seated quietly in the audience, special guest Mrs. Beulah Banner spoke to the crowd about how much she will miss hearing music in the Auditorium and the plays she often saw there. In a special ceremony and assisted by Doug Releford, "Miss Beulah" lit two candles, one symbolizing the storied past of Douglass High School, and the ambitious future of the former school building after it's renovated. 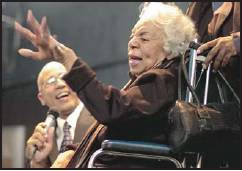 Mrs. Nora Mae Taylor, another of the neighborhood's most wonderful seniors, also made a special appearance, promising to tell on Calvin for "getting me out in all this rain." Although in a wheelchair, "Miss Nora Mae" proved she still has a good sense of humor, telling members of the audience how good it was to see them, and how she was glad to be part of the event. Afterwards, she and "Miss Beulah" stayed on, to enjoy the wonderful festivities as they continued to unfold. 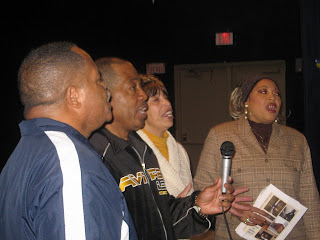 The Full Gospel Mission Choir kept the enthusiam of the audience up tempo with one of the crowd's favorite songs. Each voice stood out in song, as even folks in the back of the Auditorium were swaying and tapping their feet. One would have thought they were at revival, but then the Douglass Auditorium has heard many a good Gospel song in its day, and from this choir, there were no exceptions.. just good music. 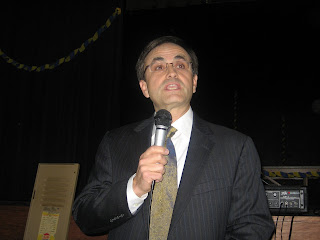 Kingsport Board of Education Member Wally Boyd Jr. spoke to the crowd about the faith of believing in a goal of good education. He said the Douglass School building had never given up its mission of educating students, noting that Kingsport's Headstart Pre-School classes moved into the building shortly after it closed as a public school in 1966, and that mission will continue well into the future. Wally himself has a link to Douglass.. as a Board of Education member, he worked with the Douglass Alumni Association to locate all of the lost Douglass athletic trophies, and rescue most of them from a dusty backroom behind the Dobyns-Bennett gym. It was also he who authorized the repair of any damaged ones, during more than 40 years of dusty storage. Those trophies are destined for a new, lighted, temperature-controlled display case in the Douglass Alumni community room. 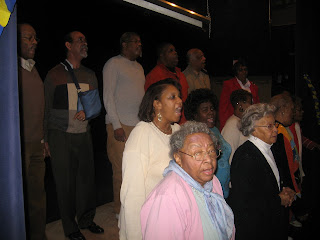 From the Bethel A.M.E. Zion Choir, a rousing number straight from the hymnals we all learned from. Just hearing the voices of inspiration, left audience members in a good mood. When the Lord gives you voice, these choir members put it to good use, and their spirit left everybody thinking "we done had church in here today!" 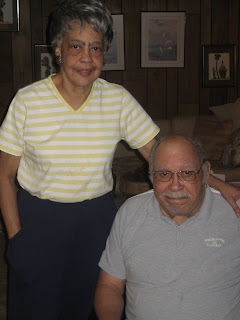 It was "A Blast from the Past," a special video presentation with interviews from several former Douglass teachers. Featured were Jill Ellis, Thelma Webb, Jessie Charles, Joyce Long, Peggy Welker Baylor, and Bob and Coty Deering. Their remembrances left the audience both in stitches at times, and almost tearful at others, as they remembered along with their former students events large and small, that shaped the school experience into a family one. A DVD of the program interview segment will be for sale soon, along with a longer version to be made for Black History Month, and even more teachers will be added as we discover their whereabouts. Please watch the website for an update on these wildly popular teacher interview segments. 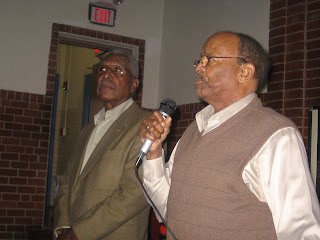 Former Douglass Football Tiger teammates Jack Pierce and Bobby Joe Johnson told the crowd of several of the football player exploits during a heyday of Tiger football and basketball highlights. Some of the special plays and experiences they related, were good examples of how taking part in Douglass sports, built character and stability in the student mind. 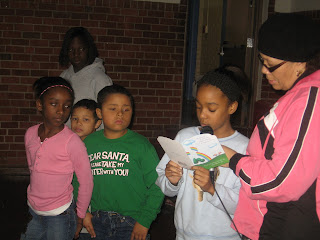 The New Vision Youth Kids had a special presentation, gleaned straight from the school books of former Douglass students. Just as the names of former students were discovered in the books discovered in closed lockers for more than 40 years, NOTES from those books were also found, some of them detailing football and basketball schedules, crip notes (Johnnie Mae called them 'cheat sheets'), and even excuses from parents to teachers, for why a particular student was absent from school.
The New Vision Youth Kids had these historic pieces of paper laminated, and were presented to the Douglass Alumni Association for inclusion in the upcoming Community Room display case.

After the singing of the Douglass School Song led by Mrs. Louetta Hall, an update on the HOPE VI Revitilation Project from Kingsport Housing and Redevelopment Authority Executive Director Terry Cunningham, and the Benediction by Full Gospel Mission Pastor Geraldine Swagerty, the audience was free to tour the building one final time and enjoy refreshments provided by the South Central Kingsport Weed and Seed Office.

It was special to note that many former Douglass students lingered long after the program was over, to socialize and take in the building as they remember it, knowing that in two months, the face of a Riverview cornerstone will change dramatically. It was almost as if they didn't want to leave.

And then, the historic auditorium fell silent, its voice stilled, its history frozen forever... the storied walls awaiting the distant hum of a demolition crew's upcoming handiwork. 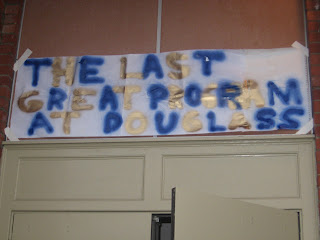 "The Last Great Program at Douglass" was indeed that.. a final, last tribute to the students who attended, the teachers who taught, the parents who volunteered, and a community who held the largest Black school in the area, close to their hearts, and forever in their memories.

We are, and will always be, with our children and descendants "The Sons and Daughters of Douglass!"