(King) knew this day would come. His dream is not a dream deferred, but a dream preferred.’
— Pastor Matthew Thomas


KINGSPORT — A recent national poll showed two-thirds of African-Americans believe that Martin Luther King Jr.’s dream has been fulfilled.
A local pastor who was among 60 people parading down Center Street Monday afternoon in observance of Martin Luther King Jr. Day said that dream can only come true when people of different races can look at each other as brother and sister. 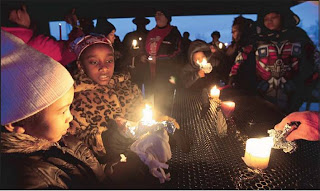 Monday’s MLK Spirit Walk in Kingsport drew one of its biggest turnouts. In addition to Martin Luther King Jr., President-elect Barack Obama was on the marchers’ minds.
Pastor Ronnie Collins said Southern states including Georgia, Mississippi, Alabama and Tennessee weren’t ready to see an African-American as president.
“We know that racism still exists, but I think that what made things different was Barack did not focus on his race during the election, and I think people cast their ballot for him based on the content of his character. So the dream is succeeding but not totally coming to pass,” Collins said. 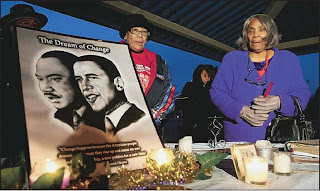 A CNN-Opinion Research Corp. poll released Monday showed that 69 percent of blacks interviewed believed King’s dream had been fulfilled, while only 45 percent of whites shared that feeling.
Gabrielle Ziegar of Kingsport said race played no part in her walk downtown Monday.
“I’ve been coming every year, and it is always such a blessing to me — seeing people come together like this,” Ziegar said. “The time we have together and the prayer that comes along with an event like this is special.”
Former Tennessee state Rep. Nathan Vaughn said days like Monday and Tuesday’s inauguration of Obama are times of celebration, but they can be shortlived because of discrepancies that still exist among Americans.
“Women still earn less than men in some areas, and some blacks still earn less than their counterparts. ... People need to think more of what it can be instead of what it was,” said Vaughn. 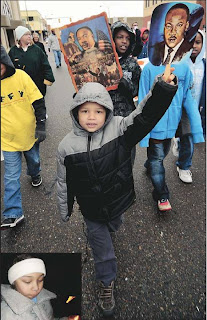 As “We Shall Overcome” echoed along Center Street, Johnnie Mae Swagerty and her New Vision Youth students continued their tradition of taking a place in the march.
“Spell it out,” yelled Swagerty.
“U-N-I-T-Y!” the students yelled back, followed by shouts of “change the world” and “yes we can.” 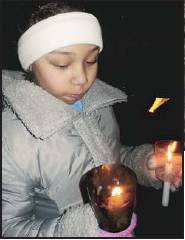 During speeches held in the parking lot of the Justice Center following the parade, Pastor Matthew Thomas wanted participants to remember the day that is set aside for King.
“(King) knew this day would come. His dream is not a dream deferred, but a dream preferred,” Thomas said.
Posted by douglassriverview at 9:57 PM