KINGSPORT — The prevailing view from 853 Dale St. just after noon on Tuesday was it’s good that Barack Obama is president of the United States of America, but he needs God to lead him. 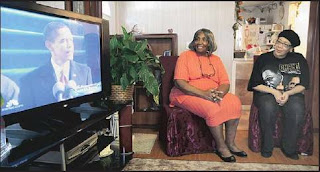 A half dozen Kingsport African-Americans gathered inside Edward Hayes’ home to reverently watch the nation’s first African-American take the oath of office and deliver his “New Era of Responsibility” inaugural address on television.
None shed any tears, and they were direct about what Obama needs to lead America.
Edward Hayes, his wife Tish Hayes, Terry Moore, Angel Blye, Johnnie Mae Swagerty and her mother, Geraldine Swagerty, applauded after Obama became the nation’s 44th president.
Geraldine Swagerty, pastor at the Full Gospel Mission, breathed a sigh of relief when Obama mentioned “God’s grace upon us” at the end of his remarks.
“I’m glad he said something about the Lord,” she said. “He’s going to have to have the Lord first in his life, God bless him.”
Then she stressed what it will take for Obama to be an effective leader.
“I thank God for allowing a man like him (to be president),” Geraldine Swagerty said. “I just hope and pray that he will let the Lord lead him instead of him leading himself because that is what is wrong with America today. We are getting away from God. We need to get to God because He is the one who is going to lead us. ... He needs to let God be first in his life that he could run America like it should be run. ... He should make a fine president if he lets the Lord lead.”
Moore quickly chimed in.
“In my generation I never thought I would live to see a black president much less the changes that have taken place in the world today,” he said. “It is an honor that we have a black president, and I hope that he does let the Lord lead him in every way. Without the Lord this country will definitely fail.”
Hayes was viewing Obama’s ascension to power as not being about race.
“I’m trying not to see black and white,” Hayes said. “I’m proud to see this individual hold this position now with him being considered a black man. But all in all, I’ve felt this day would come. I never felt we would be held back from a higher position. If you look around it is flowing throughout the world now. It is great to be a part of it and history being made, but it’s like everybody else said, ‘God is still in control.’ If we let him play the role in our lives, everything is going to work out pretty good. We’re hoping and praying this individual will serve the United States and do a great job.”
Hayes added America should stop looking at Obama as being a black president and view him simply as the president.
“If you look at him from a Christian standpoint, there is no color anywhere,” Hayes said of Obama. “If you look at it from a black or white perspective, you are overlooking the big picture. ... If you keep throwing gender in it, color in it, we really haven’t left yesterday.”
Posted by douglassriverview at 10:08 PM