HIS ARTICLE REPRINTED WITH PERMISSION FROM THE KNOXVILLE NEWS=SENTINEL

Don Hickman has already enjoyed a multifaceted life as a pioneering black professional, but he recently took on one more role - that of a novelist. 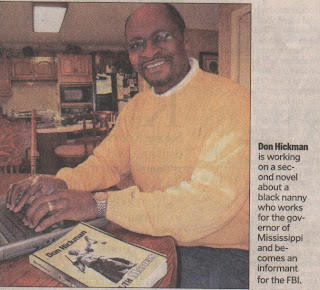 The retired Tennessee Valley Authority assistant inspector general has published his first novel, "Truth Matters," which was loosely based on the killing of a former TVA colleague.

Hickman said he made plans to write a book when he retired after 18 years at TVA in 2004. However, the book was to be a nonfiction account dealing with the deaths of both his former colleague, who was beaten to death, and an assistant principal he knew while serving in the military.

Quickly, though, Hickman gave himself a rejection notice.

"About a third of the way through it, I said that this is not really interesting to anybody," he said with a laugh.

With the encouragement of a friend, he decided to make the book fictional.

The story deals with the bizarre circumstances of a former FBI agent's death and the arrest of his wife for the murder. Through skillful legal work, she is vindicated, although former FBI agents continue to search for the truth.

When Hickman completed the book in 18 months instead of the six or eight he expected, he faced rejection from potential publishers and agents.

"After eight or 10 rejection letters, I said that my ego cannot stand that, so I looked at self-publishing," he said.

He was able to get it published through self-publishing company Infinity Publishing, and the book came out last April. To date, he has sold several hundred copies, he said.

Hickman's own life has been as rich as that of a character in a novel. He was the first black student to graduate from Kingsport's Dobyns-Bennett High School, where he was a top student and a talented athlete. From there, he went to Maryville College and became a standout athlete.

He played briefly in the National Football League before joining the military and served on a nuclear missile base in South Florida at the end of the Vietnam War.

In 1978, after teaching and coaching at Oak Ridge High School, he became the first black FBI agent in Mississippi. "(I) would walk in and say (I am) an FBI agent and people would look at (me)," he said, recalling people's surprise.

Throughout his novel, Hickman tries to give insight into the investigation work involved in solving crimes.

Hickman relocated to Washington, D.C., but in 1986 began working for TVA in Knoxville and served for a period as the acting inspector general. He and his wife, Janet - the sister of former University of Tennessee basketball coach Wade Houston - live in Farragut where he also is involved in volunteer work. 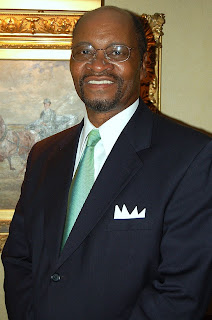 Despite his previous accomplishments, Hickman hopes the book can help him take on one more position- that of a literary role model to young blacks.

"I grew up in a time when I never knew anybody who had written a book," he said. "We often hear stories of kids whose role models are professional athletes. I hope my life clearly demonstrates we can be successful without having to roll the ball out on a court."

Hickman is already at work on a second novel about a black nanny who works for the governor of Mississippi and becomes an informant for the FBI.

John Shearer is a freelance contributor to the News Sentinel.