Sometimes it's amazing what you can learn about Black History, just by going to the local museum.

Dozens of Riverview adults and children discovered the heritage of a bygone era, during a visit to the Nathaniel Greene Historical Museum in Greeneville, Tennessee. Greene County was named after Nathaniel Greene, and the museum in his honor, is right across the street from the Andrew Johnson National Historical Site. The visit was on Saturday afternoon, February 21, 2008, to the museum's Black History exhibits, in honor of Black History Month.

MORE PICTURES ARE IN THE PHOTO GALLERY 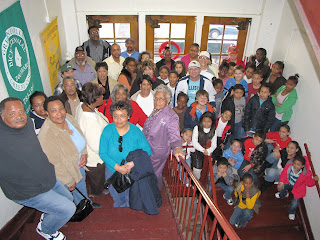 The trip was sponsored by Kingsport Parks and Recreation, New Vision Youth, the Kingsport Housing and Redevelopment Authority, South Central Kingsport Community Development, Inc., and the Elks Lodge in Riverview.

"People really enjoyed it and had a good time," says Mark Kilgore, Parks and Recreation Director. "Just learning the different cultures is great. This museum has a little bit of everything for everybody."

One of the most popular exhibits for the adults has been a collection of old, vintage pictures of African-Americans who lived in Greene County. Turns out, they're all related to many people in Kingsport, and the visit was an historic trip down Ancestral Lane. 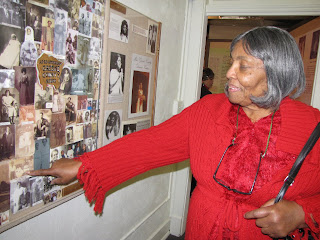 "My people are all from Greene County, and these pictures take us way back," says Pastor Geraldine Swagerty, as she studied an exhibit of old pictures. "The Pierces are family to us, and have children that still live here. It's important to remember this kind of history, because our grandchildren can see their generations, see who they come from, and historical points that we've made through the years."

"The kids are in the playroom," says Mark, "and it's no secret that's their favorite exhibit. They've got a sample of the Native American culture familiar to upper East Tennessee, to the pioneers who first settled here, to things of modern times." 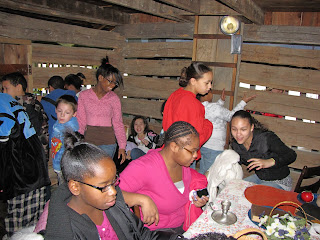 29 children made the trip on buses from Kingsport, and each one of them found something to like in the playroom, which housed a replica of a log cabin familiar to the area, and Native American drums and music makers. Every child seemed to enjoy a different part of the exhibit.

23 adults spent the time perusing the old-timey displays and photos. "My grandmother, Vannie Clark was the nanny to Andrew Johnson'sgrandmother," says Pastor Swagerty, "and she used to talk about it all the time while I was growing up. She would tell us about how whenever they'd have the big dinners in these homes in Greeneville, that she'd take the granddaughter and put her in the middle of the table, and she was the actual centerpiece of the dinner table. My grandmother would go into the Andrew Johnson tailor shop and help out. Here in town, she would go into the jail and minister to the inmates, she would stop by the sheriff's office and teach them. She'd also go on on the streets, and she had this knack of being to tell what was ailing you, 'you know the Lord has shone me what's wrong, you got a bad heart or something, and she would pray for them and they would fall out with the Spirit. She would keep praying and laying on of hands and they'd go to the doctor and find out they were healed." 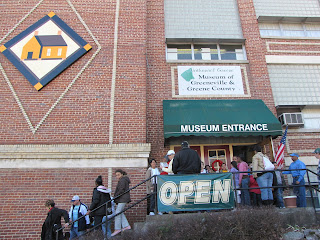 The Nathaniel Greene Historical Museum is located at 101 McKee Street in downtown Greeneville, Tennessee.
Posted by douglassriverview at 12:26 AM