Vaughn Says He’s Not Finished Yet

THIS STORY COURTESY THE KINGSPORT TIMES-NEWS
By HANK HAYES
hhayes@timesnews.net

KINGSPORT — A Saturday night appreciation event for former state Rep. Nathan Vaughn turned into a campaign-style rally with calls for him to run for election and win his seat back in 2010.
“We would be extremely pleased if he would take a look at running again,” Tennessee Democratic Party Chairman Chip Forrester said of Vaughn, a Kingsport Democrat who served Tennessee’s 2nd House District. 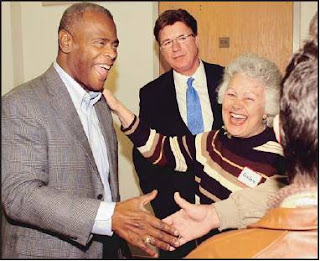 “Let’s make this a campaign kickoff,” House Democratic Leader Gary Odom of Nashville told Vaughn’s supporters.
Vaughn said he wasn’t making any announcements about his political future but indicated he will have one.
“I just know that I’m not dead yet,” Vaughn said. “I intend to be involved in the community. I intend to be involved in the state. It is not my intent to basically go away. This is not a celebration of my retirement.”
There was also plenty of venting about the campaign tactics used last fall against Vaughn, Northeast Tennessee’s first African-American state lawmaker, in his narrow loss to Republican Tony Shipley.
“The campaign tactics used to defeat him were racist and disgraceful,” Odom said. “I’m encouraging Nathan to run (for election) and I promise to do everything I can to help him in that effort.”
Vaughn said if he had “played the dirty political tricks” used against him, he would have won.
“But we need people willing to be statesmen rather than politicians,” he told the crowd.
During his re-election campaign, Vaughn faced political attacks on at least three fronts.
There was an effort from Tennessee House GOP legislative aide Scott Gilmer to use Vaughn’s name in fake Web sites distributing false campaign information.
Vaughn alleged in an ethics complaint that House GOP Leader Jason Mumpower of Bristol and House GOP Caucus Chairman Glen Casada of Franklin directed Gilmer’s work.
The Tennessee Ethics Commission, however, dismissed the complaint and claimed it did not raise any issue related to the state’s ethics reform law.
Vaughn got a restraining order last September to take down the Web sites and also took out a criminal complaint against Gilmer. He accused Gilmer of violating a state law that says campaign information is supposed to be authorized by the candidate, his campaign or his representative.
Gilmer will enter a no contest plea to the complaint, Vaughn said.
“If Jason Mumpower did nothing wrong, then why is (Gilmer) pleading no contest?” Vaughn asked at the event.
The most controversial attack came from the Tennessee Republican Party (TRP) in a direct mail piece that electronically pasted a picture of Vaughn’s head on a blackbird.
Forrester called the mailer a “racist attack” against Vaughn “led by (TRP Chairwoman) Robin Smith, fueled by Jason Mumpower and stoked by (former TRP Chairman) Chip Saltsman.”
Vaughn was portrayed in the direct mail piece as “part of the liberal, big government flock” with President Barack Obama and U.S. House Speaker Nancy Pelosi. Losing GOP presidential nominee John McCain beat Obama by 41 points in Sullivan County — more than 26,000 votes.
In response, Sullivan County GOP Chairman Jason Booher defended the mailer.
“Birds of a feather flock together, that’s a common expression that’s been around for a long time,” Booher said. “That was the intent of the mail piece to establish that Nathan Vaughn, being a Democrat, aligns himself with the individuals portrayed in the ad. It had nothing to do with race. The Republican Party is the party of Lincoln with equal rights for all.”
Then there were attacks coming from Shipley, who claimed Vaughn was soft on illegal immigration and backed “jobs killer” legislation supporting a higher state minimum wage.
Vaughn suggested a series done by the Kingsport Times-News examining Shipley’s claims against Vaughn’s voting record was unfair.
“That’s the kind of thing that really does discredit to our media,” Vaughn said of the series.
There was also venting — and some laughter — about Mumpower, who failed in his bid to become House speaker when Odom nominated Carter County Republican Kent Williams to succeed longtime Democrat House Speaker Jimmy Naifeh of Covington. Williams won the speakership by a 50-49 vote with his and the votes of 49 House Democrats.
State Rep. John Litz, D-Morristown, joked that he brushed against Mumpower on the House floor last week.
“(Mumpower) said ‘I want you to send mine and (Lt. Gov. Ron Ramsey) Ron’s appreciation to the event on Saturday,’ ” Litz said. “If I would have thought quick enough, I would have asked him for one of those flags (Mumpower had ordered numerous flags to be flown over the Capitol on the day of the speaker election). He didn’t need them.”
In concluding his remarks, Vaughn called for unity and said he didn’t want people to think he was done politically.
“I will stop serving you when they throw the last bit of dirt on my coffin and say ‘It is done,’ ” he said.
Posted by douglassriverview at 9:56 AM