An unveiling ceremony was held Monday to announce the renaming of a portion of Lincoln Street to Martin Luther King Jr. Drive. 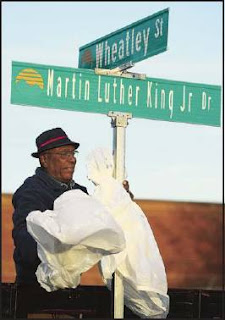 
KINGSPORT — In spite of belowfreezing temperatures, about 50 Model City residents took to the streets on Monday and participated in the annual Dr. Martin Luther King Jr. Holiday Parade in downtown Kingsport. 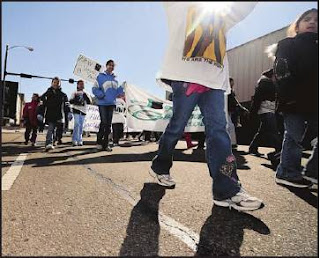 The parade began shortly before noon at the intersection of East Sevier and Center Street with participants walking and driving to the City Hall parking lot downtown. The small but dedicated congregation included about a dozen or more kids from the New Vision for Youth program, more than 30 adults and a handful of vehicles.
Overseer Ronnie Collins with the Tennessee & Virginia Fellowship Against Racism said he was excited about everybody who attended Monday’s parade.
“If we can get 50 people or so, we’ve done well. When it’s cold like this, that’s what we hope to get,” Collins said, adding he thinks America is at a pivotal point to change. “Based on what we’ve seen, with (Barack) Obama. We know it’s a change. I’m not going to say racism is gone. It’s not. But as far as how things are being done, people are putting forth more effort, trying to do right, trying to talk instead of fight. 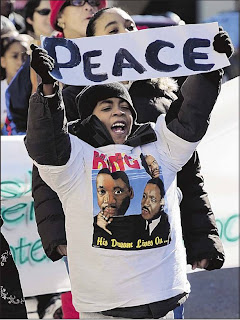 “The nonviolent attitude Dr. King taught us is still alive and well.”
Ten-year-old Xena Huff, with New Vision, said her parents have educated her about King to better help her understand who she is and what is happening around her.
“The reason why I’m marching is to show people that today is a really important day, and without Dr. King, I think we’d still be back segregated, still be apart and be treated differently,” Huff said.
Martin Luther King Jr. Day became an official U.S. holiday in 1986 and is held on the third Monday in January to commemorate the birthday of King. The holiday was officially observed in all 50 states for the first time in 2000.
Stella Robinette said she felt great about the event and thought it appropriate for Charles Maxwell to enter one of his charter buses into the parade with the words “Celebrating the Dream of Dr. Martin Luther King” on the side.

“I wish more people were out here. I think our younger generation, they don’t know the struggle, the trials and tribulations we’ve had as an older group,” Robinette said. “(Education) should start at home. Maybe their parents don’t know what the struggle is all about. They don’t know the true struggle. They only know bits and pieces.”


Still, she thinks race relations in the United States are better.
“I still think there’s work to be done. There still needs to be education throughout the whole world. It’s not just a black-andwhite issue. It’s minorities total. We all need to be educated.”
The Rev. Anthony Daniels, former pastor of Central Baptist Church and current pastor of First Baptist in Barberville, Ky., said recognizing King’s dream has been an asset for the country.
“I think it’s phenomenal. I think it’s good for the country. It’s done more to bring us together,” Daniels said. “In some locations I guess we’re polarized. For the most part race relations, the progress we’ve made, couldn’t be better.”
Monday afternoon the city held an unveiling ceremony at the corner of Lincoln Street and Wheatley Street to announce the renaming of a portion of Lincoln Street to Martin Luther King Jr. Drive. The BMA voted unanimously last week to rename that portion of the street, which stretches through the Riverview comm u n i t y.
This renaming is one of the goals that has been nearly 10 years in the making for TVFAR, Collins said.
“Today makes me feel wonderful. After all the time we spent back in 1997, our first march in 1998, our main objective was to have a street renamed for Dr. King, and that has finally manifested,” Collins said. “We are excited and are looking forward to the next phase, which we want to go from where (the street) is now, to reconnect it to Main Street."
Posted by douglassriverview at 11:08 AM