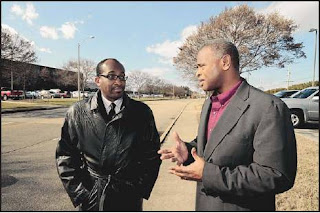 An unveiling ceremony for the new street name is scheduled for 5 p.m. Monday.

• The MLK Holiday Parade will be held Monday at noon in downtown Kingsport. Page 2B.
The Rev. Ronnie Collins, with the Tennessee & Virginia Fellowship Against Racism, was one of the people involved in getting a street in Kingsport renamed after King. Collins said that back in 1998, when this idea first came up, he thought it would be unreachable.
“We are ecstatic about it. Everybody I’ve talked to so far has been excited about it,” Collins said, adding it has taken about a year to get the street renamed. “There are not many cities in the U.S. where there’s not something named after Dr. King, because not in how he impacted African Americans, but how he affected African Americans, whites, the poor, the underprivileged. (King) crossed all boundaries and all ethnic groups to bring the idea that while there may be some problems, the only way to solve them is to first recognize them and then work together.”
Initially, some residents wanted Center Street renamed in honor of King.
“We talked about it for a while — the pros and cons — and when you’re renaming a heavily populated street, it creates all kinds of turmoil for people,” said Mayor Dennis Phillips, who was also involved in the renaming process. “So we came up with something that would not affect as many people. This one was just a situation with the least amount of inconvenience and met the goal of what the citizens wanted.”
Phillips said the name change also times well with the HOPE VI project taking place in the Riverview community. Kingsport received an $11.9 million HOPE VI grant from the U.S. Department of Housing and Urban Development to help replace the 92 public housing units at Riverview Apartments with 32 homes.
“I feel that it was a request that the city should be willing to do, and I feel good about it,” Phillips said. “Many cities have a Martin Luther King Jr. Drive like we have a George Washington and John Adams. I’m proud of the way the city has rallied behind and been able to do this.”
Soon after the BMA voted to change the name of Lincoln Street, a systematic process kicked into gear within the city in order for everything to flow with little disruption, said Chris McCartt, assistant to the city manager.
“What we’ll do is first identify all of the addresses that would be affected. Then (Kingsport) GIS department notifies the post office. Then we’ll notify central dispatch so all 911 services go without any interruption,” McCartt said.
As soon as central dispatch is notified (last Friday), McCartt said the street name change would technically be in place. The signs have been made in-house, and transportation crews will prepare and install the new signs along the old stretch of Lincoln Street.
Posted by douglassriverview at 2:29 AM