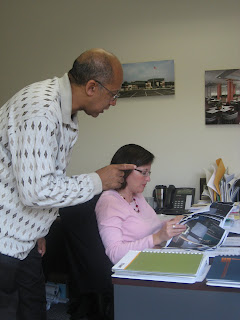 It's no secret that most people in Riverview and South Central Kingsport are eagerly anticipating the proposed $7 million dollar renovation of the former Douglass School building.

They are not the only ones.

Several of Kingsport's non-profit agencies are also anxiously waiting on the renovation, because they plan to move into the re-designed building. It's a proposal that City Manager John Campbell says, "will make the Model City one of the few (if not the first) municipality that will have all of its non-profit agencies under one roof."

"Right now, I've got about 10 players that I am trying to find homes for," says architect Dineen West of Cain Rash West Architects, one of the designers of the Douglass School renovation. "Among the largest agencies are the American Red Cross and the United Way, then there are some smaller ones like the Adult Literacy Program, a seniors program, a volunteer program, Meals-on-Wheels. We are also looking for duplication among the programs, because maybe some activities can be combined into similar agencies. The Kingsport Police Department will also lose its small substation in the Riverview Apartments, and we are trying to plan for a small room with a restroom in the Douglass building for officers on duty."

RIGHT NOW, THE AMERICAN RED CROSS OFFICE IS AT THE CORNER OF WILCOX AND INDUSTRY DRIVES

"Right now if there is a disaster, the Red Cross has to sometimes call up local churches to set up relief programs and mobilize its contributors," she says. "In the new office space, we are trying to make sure they can do that in their own office space, perhaps with a small kitchen for emergency on-the-spot situations."

"The United Way is not only looking for office space, but also a large meeting room," says Mrs. West. "Frequently, they have a need for gathering the various agencies that are served by the agency, and office space with an adequate banquet room will serve that need."

Right now, all of Kingsport's non-profit organizations are scattered all around town, requiring people who need to access their services to travel to several locations. Mr. Campbell had said that takes time, gas, energy, and tries the patience of many people.

The Douglass High School Alumni Association is one of the non-profit agencies that Mrs. West says, will have a prominent presence in the renovated building. "The city realizes that the Alumni Association is a very important agency in the community, and that the building holds a sense of reverence to former students and residents of the neighborhood. Along with the Douglass athletic trophy displays we feel are important to remember the heritage of this historic school, the Alumni Association will be easily accessible in the renovated building, not only to its members, but to the community it serves."


RIP UP THE ASPHALT

"I would really like to tear up all that asphalt in the courtyard between the auditorium and the cafeteria," says Mrs. West, "and return it to grass, the way it used to be when the Douglass High School Marching Band used to practice there. This time, there would be landscaping done, and that ugly chain-link fence would be gone. That's a green space that would benefit the new look of the building. The parking that is there now, would be shifted to the other side of the building into a new parking lot that would be where James Street is now. Eastman has already promised that they will let us park in their parking lot across Wheatley Street, and remove part of their chainlink fence there. That will help us handle any overflow of parking in our lot."

"To keep the non-profit agencies separate from the community-oriented side of the renovated building," says Mrs. West, "we would propose building a new addition where the bandroom is right now, perhaps a two-story, even a three-story, depending on how many dollars are available. That will essentially give the front of the school building a community-oriented look, with the backside having a corporate-office type look. We're also considering having the one big banquet room, and having all of the non-profit agencies open up into it, and they would all share the room for meetings and other events."

Although plans for most of the Douglass School building seem certain, Mrs. West says the future of the former auditorium is much LESS certain.

"Over the last few months, we have gone through the auditorium with structural engineers and electrical experts," Mrs. West says. "We even brought in a state codes person from Nashville, and looked at sprinkler, air conditioning, roofing and fire code issues. The ceiling in the auditorium is totally asbestos, which helped make the room soundproof, but now that asbestos will have to be removed to meet the state code. Also, the auditorium has serious roof leaks that will require new roofing, a new sprinkler system, an air conditioning system, sewer system makeover and asbestos removal."

"With just so many dollars available, you have to stand back and look at the room carefully..we could drop a million dollars into the auditorium JUST to bring it up to code," she says, "and it not change the overall appearance of the room at all. There are some renovations to the auditorium that may not be able to be made, but the decision on that is far from being made."


A BIG CHALLENGE TO BRING EVERYTHING TOGETHER

"As I've said before, any proposals we are looking at, are subject to change.. nothing is set in stone, says Mrs. West. "We want to spend money economically to renovate the building, but the biggest challenge is, what can we do to make it LOOK like a renovation, and still put in enough infrastructure to make it work. What can we do to get the most BANG for the city's BUCK?"

"That," she says, "is what will shape one of Kingsport's most historic buildings, into one of Tennessee's most innovative facilities."
Posted by douglassriverview at 12:32 AM