Man Urges Drivers to be Safe, Patient After Brother's Death

This new year, Anthony Bond will still be grieving the loss of his brother. But he hopes that by talking about his death, others might make patience one of their resolutions today.

Mr. Bond said that if a truck driver had been a little more patient while driving south on the Dallas North Tollway, then the man might not have crashed into the median, causing a slab of concrete to go through Mr. Bond's windshield and kill his brother.

William M. Bond, called Billy by family and friends, died at the scene Dec. 20. He was 57. 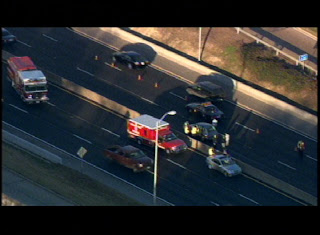 Mr. Spicer could not be reached for comment Monday.

Witnesses told police Mr. Spicer was driving aggressively and following the car in front of him closely when he switched lanes, lost control and ran into the median.

News of the pending arrest has Anthony Bond feeling mixed emotions, he said.

"I believe that any time you cause the death of another person by driving in a careless manner, you have to pay for it," Mr. Bond said. "At the same time, I'm a Christian; I have to forgive this."

Billy Bond was on the way home from cancer treatment just five days before Christmas when the wreck happened. William Bond Sr., the men's father, died on the same date in 1984 from a heart attack, Anthony Bond said.

Mr. Bond finds comfort in the fact that the deaths happened on the same date but is still looking for a way to understand and cope. So he said he turned to God.

"In the new year, I look forward to the rededication of my life to Christ," Mr. Bond said.

He's also asking drivers to take their time and care for their cars. First, people should make sure their vehicles are well cared for, Mr. Bond said. Then, when they get on the road, they need to slow down and drive safely, he said.

Doing so might make the difference for someone else, Mr. Bond said.

He said, "I am without my brother, a 17-year-old is without her father, and one of the most caring people I know is without her husband, because of ... [the driver's] reckless actions."
Posted by douglassriverview at 9:36 AM