(The new MLK Jr. Drive is the old Lincoln Street in Riverview)

Road through Riverview currently dead-ends near the back of the General Shale property. 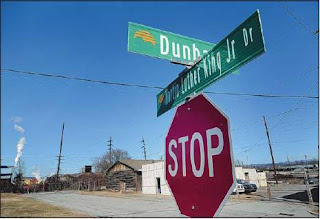 KINGSPORT — Connecting the Riverview community to downtown Kingsport by extending Martin Luther King Jr. Drive to Main Street is in the preliminary talking stages, Mayor Dennis Phillips said last week.
Earlier this month, the Board of Mayor and Aldermen voted unanimously to rename a portion of Lincoln Street to Martin Luther King Jr. Drive. The Rev. Ronnie Collins with the Tennessee & Virginia Fellowship Against Racism helped push the renaming forward, saying this has been one of the goals of the organization for nearly a decade.
An offshoot of this goal is to also see the Riverview community connected with downtown, Collins said.
“Since I’ve been here for the past 26 years, I’ve always wondered why isn’t Riverview connected to downtown?” Collins said. “People have gone through the tunnel (near the old Kingsport Foundry property), which hasn’t always been safe. It’s safe now, but it’s still inconvenient.”
The road through Riverview currently dead-ends near the back of the General Shale property. If the road were to be extended, it would have to cross that property and the CSX railroad line and come out beside the Kingsport Chamber of Commerce at Cherokee Street.
“With this, it brings it back downtown and gives those who are leaving Eastman an ability to go downtown, to Netherland Inn or wherever they’re trying to go,” Collins said. “Our approach to everything we’ve done in the past is we have to give it time, and we believe it’s the right thing to do.
“This is a progressive time for Kingsport and is a time we can really get some of these things that people have been talking about for years, actually done.”
Phillips said the idea is in the preliminary talking stages at this point and added if Martin Luther King Jr. Drive can be connected to downtown, he thinks the city should do it.
“I think we need to look and see if it can be done. I have been up there, me and the city manager, and there’s certainly some obstacles to overcome when you’re going through an industrial area like General Shale,” Phillips said. “We have not had the opportunity to talk to them, to get their reaction, before we really get going on the possibilities of opening this street.
“I do plan to talk to General Shale and see what the pros and cons are of doing this.”
Before moving forward on the project, Phillips said the city would have to consider the safety factor, the impact on General Shale, and deal with CSX about crossing the railroad line.
“It’s been talked about for a long time ... and I would certainly be in favor of another avenue (out of Riverview), if we could possibly do it,” Phillips said. “They want to be reconnected to downtown. I don’t think we need any disconnected communities, regardless of where they are.”
Collins said he spoke with several residents of the Riverview community, including one lady in her 70s who had lived there her whole life, and no one remembers Martin Luther King Jr. Drive ever being connected to Main Street, though General Shale would let residents walk through their property to the downtown area.
Kingsport Public Library officials consulted maps of Kingsport from 1919 and the 1930s and found no evidence of a road stretching from the Riverview community to downtown.
Posted by douglassriverview at 9:12 AM