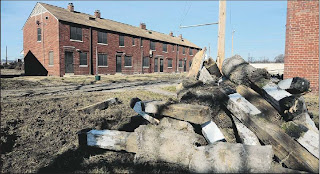 David Grace —dgrace@timesnews.net Demolition of the Riverview Apartments likely will begin during the first or second week of February and take up to 120 days.


Demolition work on Riverview Apartments likely will begin during the first or second week of February, and a groundbreaking for new homes in the Sherwood/Hiwassee area is scheduled for Feb. 12.

KINGSPORT — Two major milestones in the HOPE VI project are soon to begin — the demolition of the old Riverview apartments and the beginning of house construction in the Sherwood/Hiwassee area of town.
In October 2006, the U.S. Department of Housing and Urban Development awarded the Kingsport Housing and Redevelopment Authority an $11.9 million HOPE VI Revitalization Grant.
The money will go toward building new public housing homes in the Riverview community and single-family houses in the Sherwood/Hiwassee area of town.
Kingsport plans to demolish Riverview Apartments and replace the 92 units with 32 homes (16 single-family houses and eight duplex units). Six other houses will also be built on scattered sites in the Riverview area.
Doris Ladd, director of the HOPE VI project, said four residents have yet to be relocated from Riverview Apartments, but everyone should be out by the end of the month.
“All of those (residents) have places identified they are moving to with one exception, and we’re still working with that family. Most of them are going to a Section 8 voucher home or apartment,” Ladd said. “Considering you’re dealing with people’s lives, I think (relocation) has gone well.”
Since most of the residents have moved out of Riverview Apartments, Kingsport’s police and fire departments have been conducting training exercises within the complex. Ladd said demolition work on the apartments likely will begin during the first or second week of February and take up to 120 days to complete.
Construction on new homes in the Riverview community will begin in early 2009, Ladd said.
People who return to the new houses in Riverview will have to agree to certain qualifications, Ladd said, such as being a part of the family self-sufficiency program at the Kingsport Housing and Redevelopment Authority and be employed. Residents in other public housing units within the city do not have to be in the self-sufficiency program.
The second phase of the project calls for the construction of 24 affordable home ownership units in the Sherwood/Hiwassee area. In September, the city demolished 29 homes along the two streets where the new houses will be built.
A groundbreaking for this phase of the project is scheduled for Feb. 12, and Ladd said all of the houses should be built by September.
“Walker Construction is who we have an agreement with. They’re out of Chattanooga, and they did a HOPE VI project there,” Ladd said. “They’re hoping to turn three or four houses a month; one per week.”
Ladd said these houses would cost about $130,000, and the KHRA has 15 applicants lined up for these houses.
“They’re being reviewed, and two are really good candidates, and we hope to have one at our groundbreaking,” she said.
The entire HOPE VI project — both construction projects, the opening of the HOPE VI/Fresh Start office and the purchase of property along Martin Luther King Jr. Drive — is estimated to cost at least $30 million. The $11.9 million grant is just part of the funding needed to complete the project, Ladd said.
“We still have to do the application for the low-income housing tax credits, which will be submitted in the middle of March. We’ll receive notice if we’re in consideration in June, and if awarded, it would be in September. Then we’ll go out and market those credits,” Ladd said.
Posted by douglassriverview at 9:02 AM