The smell of boiled chit'lins and fried fish brought the folks out to a Riverview-South Central fundraiser, that filled most tummies to bursting.

PHOTOS IN THE PHOTO GALLERY 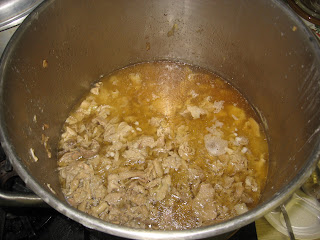 The 2008 Chit-lin Strut and Fish Fry was held this past Saturday, March 29th at the Bethel A.M.E. Zion Church in Kingsport. The event raises money for the church's New Vision Youth and its programs. 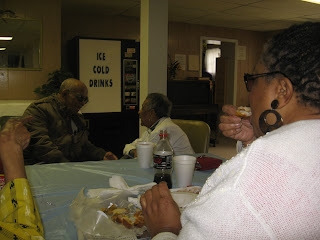 Traffic was slow at first in Bethel's Fellowship Hall (can you REALLY eat chit'lins at high noon?), but word spread about as fast as the smell. Pretty soon, folks were lined up to get a plate of fixings, and a bowl of chit'lins, just like Mama used to make.

Fried whiting fish was also on the menu (for those people who could LOOK at the chit'lins and not eat them). Both delicacies came by themselves, or in a plate of brown beans, cornbread, slaw and tea. Fish sandwiches were also available.

And what about that scented candle spotted next to the pot of boiling chit'lins? 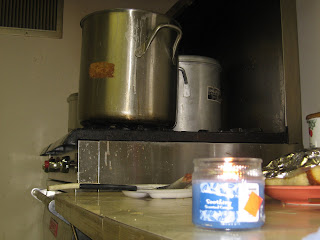 "It's there," Johnnie Mae says, "so the smell won't go up into the Bethel sanctuary and into the pulpit, and Rev. Pierce won't go off on us. Folks may not get the Holy Word, if they're thinking about the 'chit'lin word."

"We bought 160 pounds of chit'lins," says Johnnie Mae, "but by the time we got through cleaning them and culling them out, they weighed 103 pounds. We also got a case of whiting fish. New Vision parents really helped us get everything ready for the fundraiser." 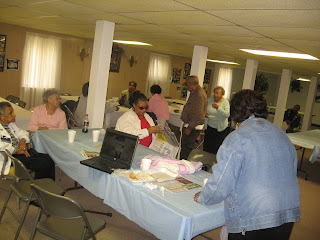 "It's been a good crowd for the chit'lins," she says.. "Every chit'lin got ate, and every fish got sold."

"It's been a good day for the New Vision Youth."
Posted by douglassriverview at 1:14 AM