"Unveiled Praise" In Concert at Central Baptist Church in Kingsport

It was a world-class concert at the Central Baptist Church in Kingsport. 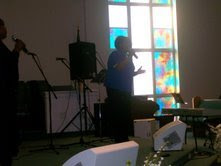 And it's a world audience that may soon hear from two world-class performers. 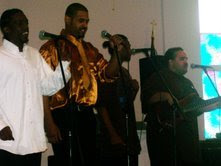 Also on the program was the Gospel Soul Lifters group from Rockwood, Tennessee, performing two selections. "People had heard of them before and knew they could sing," says program promotor Allan Faulkerson, "but they had never heard them before."

"They were great.. they put on a super show, and really set the tone for the concert."

Then, Mrs. Alley and Ms. Isom took the stage, and simply wowed the crowd with their gospel renditions. 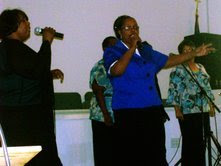 Over 200 people attended the concert, and in the crowd were videographers for "Dr. Bobby Jones Gospel," the long-running show on BET. A video presentation of the concert is being prepared for Dr. Jones, and hopefully his staff will consider including Ms. Isom and Mrs. Alley for the Sunday morning program.

"I told them both," says promoter Faulkerson, "that you might not get any farther than then.. but then, you might turn the corner at the end of the street with this performance. Learn from the experience, and always show stage presense. We hope they like what they see." 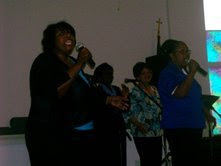 "In talking with the Bobby Jones people, I told them it's difficult to get gospel entertainers from Kingsport noticed. After I contacted them," says Mr. Faulkerson, "I started getting feedback from them. They wanted to know the fan base, their backgrounds, their vocal ranges, and finally, they asked for a video of Mrs. Alley and Ms. Isom. That's that the concert was all about."

The singers are well on the road to success, as they'll be going to try out for Gospel Focus, an "American Idol" type audition in Atlanta on April 12th. "If the judges like them," says Mr. Faulkerson, "they'll move up a level, and hopefully they'll get to the finals in Chicago. We've also got two concerts planned in Kingsport, one at the Civic Auditorium, and another at one of the big churches in town."

"As they get better, we're using any criticism constructively for them to get better and better," he says.

"If they really want to get better, they're in competition with the world, and I believe they're ready."
Posted by douglassriverview at 8:09 PM