A few employees will remain at Kingsport's General Shale Operations to handle sales and shipment of brick already in inventory.

IN ITS HEYDAY, GENERAL SHALE WAS ONE OF KINGSPORT'S BUSIEST AND MOST PROFITABLE INDUSTRIES..RIVERVIEW IS TO THE LEFT IN THIS PICTURE, THE CLINCHFIELD RAILROAD TRACKS ACROSS THE CENTER OF THE PICTURE, INDUSTRY DRIVE IS AT THE TOP, AND DOWNTOWN KINGSPORT IS TO THE RIGHT..CLICK ON THE PICTURE FOR A LARGER VIEW 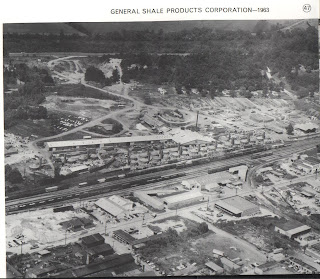 THIS NEWS COMES ON THE HEELS OF KINGSPORT'S PROPOSAL TO EXTEND LINCOLN/MLK TO DOWNTOWN, EITHER THROUGH OR NEAR THE PLANT

KINGSPORT — General Shale has temporarily halted production at its Kingsport brick plant, idling nearly 50 employees.
Mark Kinser, vice president of marketing and corporate development for the Johnson City-based company, said Monday General Shale notified workers at its Kingsport facility last week that operations here would cease for the time being. About 48 people were temporarily laid off.
“The current state of our economy and the slowdown in the construction industry has gotten us to this point,” Kinser said.
“What we’re looking for now is a pickup in business conditions that will allow us to hopefully ship the inventory in place to allow us to start the plant back up.”
Kinser said the Kingsport brick plant now has record inventory levels being stored on site. The company opted to temporarily suspend production until the economy improves and sales resume.
Kinser said government statistics show that residential building permits were down 36 percent in February this year versus the same period a year ago. That trend is impacting General Shale at various locations around the country, he said.
“The thing I want to stress is — this is strictly a temporarily layoff. And it’s strictly due to the current state of our economy.”
Kinser said a few employees will remain at the Kingsport operation to handle sales and shipment of brick already in inventory.
This isn’t the first time declining market demand has impacted the company’s Kingsport operations. In November 2006, General Shale shut down its oldest brick plant here and laid off about 40 workers at the site, citing a downturn in the nation’s housing industry.
Posted by douglassriverview at 8:54 PM