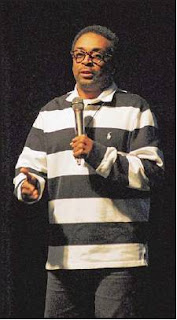 JOHNSON CITY — How do you succeed in America today?
Work hard and get an education, just like Spike Lee did.
That was one of the famed director and sometimes controversial filmmaker’s messages to listeners at East Tennessee State University’s Memorial Center Tuesday night.
Lee presented “An Evening with Spike Lee: America Through My Lens,” a program he brings to universities on a yearly basis.
Lee is noted for such films as “Malcolm X,” “She Hate Me,” “25th Hour,” “Bamboozled” and “When the Levees Broke” (a documentary about Hurricane Katrina).
Lee also touched on the presidential election, slavery, the Iraq war, filmmaking, college and other topics during the presentation, which began with a short montage of scenes from some of his films.
“You know, we live in a very, very dangerous time in this country,” Lee told the audience before saying he thought the country was in a depression and referencing the weekend acquisition of financial giant Bear Stearns by JPMorgan for $2 a share. He encouraged voting in November to the students in attendance.
“I would be scared, to be honest, ...” he told ETSU seniors. “We have one of the most important elections coming up in the history of this country.”
Critical of the Bush administration, Lee said the war in Iraq was wrong.
“This I feel is an unjust war,” he said. “We should never have been there in the first place, and to go further than that, the man should never have been in office because the election was rigged.”
Lee hinted at corruption brewing again in the upcoming election as Democrats attempt to allow delegates from Florida and Michigan to be seated at their convention despite those states violating the rules for primaries.
“So once again we have the high jinks, the shenanigans, trying to lead us astray,” he said.
Lee encouraged responsible voting and becoming educated on the candidates by doing research.
“This election is going to decide which way this nation is going to go,” he said.
Shortly before the program began at 7:30 p.m., ETSU alumna Devin Logan said she was attending because Lee was so influential in film and she was interested.
“Actually I just decided (to attend) because I wasn’t sure what he was going to speak on,” she said. “And I wanted to see what he had to talk about. I was just interested.
“He was always edgy. Trying to give the African-American perspective on things. ... And he was not afraid to take risks.”
Lee’s advice to those students in attendance was simple.
“So do yourself a favor,” he said. “And whatever it is you choose to do, you’re going to have to go at it like gangbusters.”
Posted by douglassriverview at 10:46 AM