He's slowed down a bit, but it seems Horace Curry is still raring to go..

So many people have been asking about him, and I kinda lost track of him when he got out of the hospital. Once I tracked him down, I thought I would just pay him another visit. 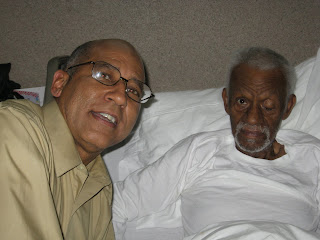 Curry was discharged from Parkridge Medical Center about two weeks ago, after suffering a mild stroke, and developing bacterial meningitis. He's currently residing at the Health Center at Standifer Place in Chattanooga, and tells me he can't wait to get out.

Luckily, bacterial meningitis is the kind that is treatable, and once the doctors got rid of that, he's now devoting much of his time to rehab, which he has every day, to build his strength back up and reuse some muscles that the stroke tried to rob him of.

He's the same ole Horace Curry.. still feisty, still opinionated, missing folks, remembering everybody, and still loves chocolate. During our visit, I told him everybody has been asking about him. Everybody who visits, usually sneaks in a little chocolate bar or something for him. He asked me a lot about what Riverview looks like now, and whether everybody who had to move out of the apartments, was coming back when the new homes are finished. I told him, I sure hope so.

Although he's anxious to get out of the nursing home, nobody knows when or if that will be, and nurses say he's much better now than he was, when he first arrived. He's doing well at rehab, and is even walking slowly on his own to the restroom and down the hallway. He says he understands he's got to take baby steps, instead of giant steps, and that rehab comes in levels and goals. 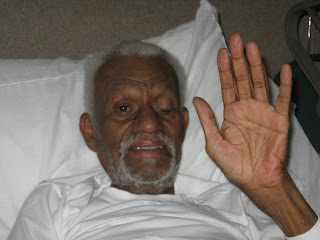 If you'd like to visit him or send him a card, his address is:

He'll be glad to hear from you.

"Tell everybody thank you for thinking about me," he told me. "I think about everybody often. I don't know when I'll get out of here, but I'm ready to go right now."
Posted by douglassriverview at 8:43 PM