The cleanup is almost finished on the site of the former Riverview Apartments. 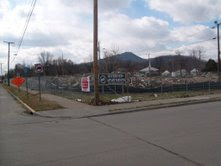 Bobby Black sent us some pictures from this past week of the mounds of rubbish, waiting to be hauled away. He was an insurance agent in Kingsport for 27 years, and now he pastors the Washington Hill United Methodist Church in Chattanooga.. he, too, has fond memories of the Historic Riverview Apartments.

HOPE VI Executive Director Doris Ladd says, the homeownership program of the government grant is moving along. She says, about 25 families who plan to come back, are going through the qualification process right now. Some of them have credit issues that are being addressed, with methods of clearing up any problems.

THIS PICTURE FROM ATOP DOUGLASS SCHOOL, IS OF THE DOUGLASS STREET SIDE OF THE SITE 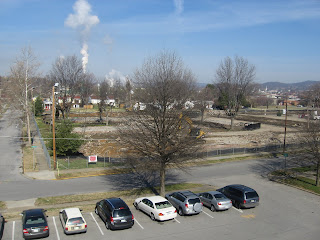 As you can see from the pictures, the site is very different from what you would expect.. after all, 13 two-story apartment units once occupied the site, which seems a lot smaller than it used to.

At this time, workers from the D.H. Griffin Demolition Company of Bristol are breaking up the concrete foundations the apartments used to sit on. That concrete will be recycled into usable concrete and gravel for other home and road projects.

THIS PHOTO ALSO FROM ATOP DOUGLASS SCHOOL, IS OF THE LINCOLN/MLK SIDE 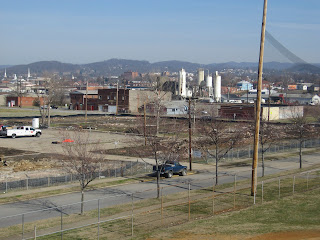 The pictures of the site now, paint a lonely picture of what's to come.. the HOPE VI homes won't start until at least the spring of next year, so it's thought that the site will be grassed over until then. Meanwhile, work is progressing on the HOPE VI homes for Sherwood/Hiwassee.

Groundbreaking for two Youth Build homes will be held in about a month. Those will be built along Lincoln Street/MLK Drive, with the other two scheduled for Douglass Street. Please watch this column for a story very soon on those homes.
Posted by douglassriverview at 8:23 PM