It was just an old bronze plaque, as worn and weathered as the scrappy and gnarled men who probably crafted it.

"The plaque represented hope," says former Riverview Apartments resident Ozine Bly. "As soon as you came through the Underpath underneath the Clinchfield Railroad tracks, one of only two ways into Riverview, there it was at the base of the flagpole flying the American flag."

THE RIVERVIEW APARTMENTS FLAGPOLE ONCE STOOD BETWEEN UNITS 3 AND 4, IN THE BROWN GRASS TO THE LEFT IN THIS PICTURE 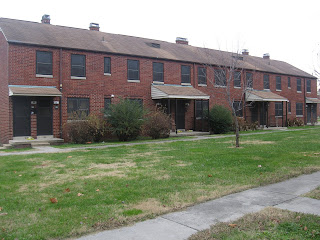 Placed between the first of the units of the Historic Riverview Apartments built back in 1940, the plaque heralded the apartments as one of the many major accomplishments of the Works Projects Administration and the Civilian Conservation Corps.

"My mother always said, that plaque identified the community," Mr. Bly remembers. "Back in the 30's and 40's, it represented a new beginning, when folks moved over from the crowded conditions of Dale, Maple, Oak and Walnut Avenues into the new Riverview neighborhood."

The Riverview Apartments stood for years as a prime example of President Franklin Roosevelt's New Deal policy, designed to bring Americans out of the poverty of the Great Depression. When the W.P.A and the C.C.C. workers were not building projects like McKellar Field (now Tri-Cities Airport), and the Memphis-to-Bristol Highway through Johnson City, Greeneville and Morristown (now U-S Highway 11-E), other workers were busy constructing housing for communities in the area.

The Riverview Apartments in Kingsport were part of that historic construction work.

According to old photographs, plaques and flagpoles were tradition with many housing projects of the W.P.A. Growing up in Riverview, the plaque was largely unnoticed and usually ignored, as residents walked by and children played underneath it. Because of deterioration at the base and probably thoughts of liability if the pole fell, both the plaque and the flagpole were removed back around 1993. The flagpole was thought discarded for scrap metal, and the plaque disappeared, its whereabouts unknown. 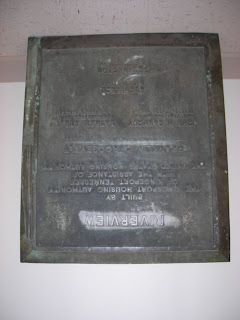 "We discovered the Riverview Apartments plaque in a maintenance storage area owned by the City of Kingsport," says Terry Cunningham, executive director of the Kingsport Housing and Redevelopment Authority. "We were cleaning up the building for an upcoming inspection, and accidently happened across it."

"It's in pretty good shape," he says, thankful that someone thought enough of it to put it away.

The plaque had been the subject of conversation among former apartment residents who remember it well.

"I remember that old plaque well," says former resident Ozine Bly. "The flagpole had a marble base, and it was mounted on that. I thought they took the plaque away because of vandalism. Anybody could have taken a pry bar to it" 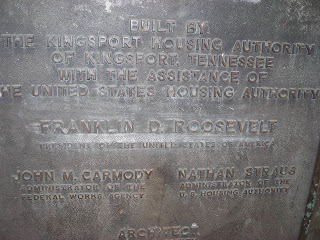 "We knew the plaque might be around somewhere, and ever since we announced the replacement of the Riverview Apartments for the HOPE VI Development, we've kinda been on the lookout for it. I'd just about given up hope of ever finding it, even looking into the possibility of replacing it."

"I'd like to see it displayed prominently in the community," says Mr. Bly, "possibly with our Douglass High School trophies and other memorabilia in the new display case planned for the renovated building."

"I am very glad to locate this piece of Riverview history," says Cunningham, "and we are determined to have it placed in a prominent place in the new development."

"When you see it," Mr. Bly says, "you can see where we've been. Look at any NEW Riverview sign, and you'll see where we're going."
Posted by douglassriverview at 9:19 PM