"Everything started.. with these books."

Many of the textbooks from which readin', writin' and 'rithmetic were taught and learned from, have been discovered in lockers at the old Douglass High School in Kingsport.

PHOTOS OF SOME OF THE BOOKS ARE IN THE PHOTO GALLERY 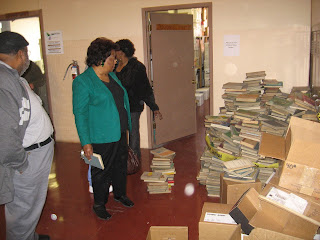 "I never dreamed those textbooks would have been in those lockers all these years," said Doug Releford, current president of the Douglass Alumni Association. "Although they haven't been used, just seeing them brought back memories of the times and the teachers we had at Douglass."

When Douglass closed in 1966, all of its African-American students were re-assigned to other schools in Kingsport. Apparently, the books were not re-assigned.. Not being needed anymore, they were placed in lockers on the second floor of the school on Louis Street, unbeknownst to anybody. 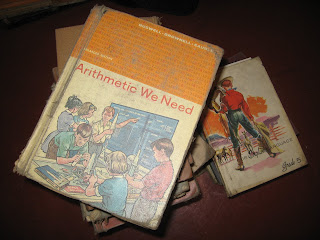 They've been there through eight U.S. presidents, 11 Kingsport Mayors, 13 presidents of the Kingsport Board of Education, 6 Kingsport School superintendents and at least three generations of students.

The historic books were discovered in their dusty hideaway, because the Douglass School building (the V.O. Dobbins Community Center) itself is due for a makeover in just a few short months, and most everything in the building not being used, has to be cleared out.

The books were accidently discovered in the lockers by building maintenance workers, who initially had instructions to throw them out. But once they saw them, Gail Evans and Charlene Hodge, who work in the Douglass School building, immediately alerted Doug and Calvin Sneed with the Douglass Alumni Association, who were able to save them from a dumpster's certain destruction.

THIS BOOK EVEN HAS HOMEWORK THAT WAS DONE BY THE USER 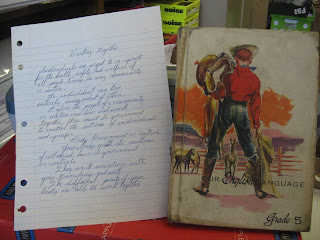 Most of the books were hand-me-down's from Dobyns-Bennett, John Sevier and Robinson, just basic noun-verb-adjective English books, and basic addition, subtraction, multiplication and division arithmetic books," says Doug. "Very seldom did we get new books, and once the used books got to Douglass, we had to take very good care of them."

"They contained our future."

Finding the books was a surprise.. an even bigger surprise was finding out what was inside the books. 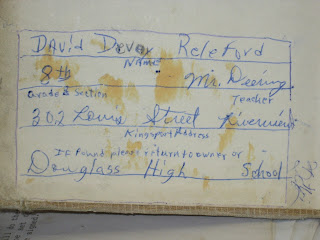 The names of former Douglass students who used the books in class were also discovered by the Douglass Alumni team who surveyed the find. Even though the books were used from class to class, grade to grade, students were allowed to put their names inside, just in case they were found by someone else during the year. Book identification made a difference in classrooms, where everybody was given the same textbook.

For Gail Evans, the discovery was more personal.

"Before my mom passed away, one of the janitors showed me a book with the name "Douglass" on it, and I asked him for it," she says. "Little did I know, that very book had my brother Ricky's name in it. It was his textbook from his school days at Douglass."

Ricky (Richard) Evans passed away in March of 2004.

"I took the book and gave it to my mom," says Gail. "She just smiled and gleamed as she read it. She mentioned how Ricky would have gone crazy over finding it. It was a very special moment, and she was very happy to have it."

The textbook is even more special now. Gail's mom, Mrs. Julia Evans, passed away in June of 2007.

Names like Andrew Dover, Yvonne Reese, Carolyn Dulaney, and even a teacher are inscribed in the books.

PICTURES OF SOME OF THE NAMES ARE IN THE PHOTO GALLERY. 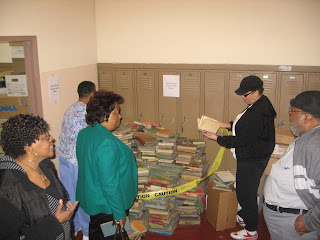 "I remember having several classes using several of the books," says Douglass alumnus Virginia (Jenny) Hankins, as she went through the stacks with Louetta Hall, another alumnus. "Me and Louetta were talking about what a good education we all got using these books, and we wondering what kind of education the kids were getting these days, because they don't seem to have gotten the same kind of education we did at Douglass."

"Stored for 42 years--have I been out of school that long?" laughed Andra (Puddin) Watterson. "I was thrilled to go through some of the books we had, especially near my old locker. That's history right there." 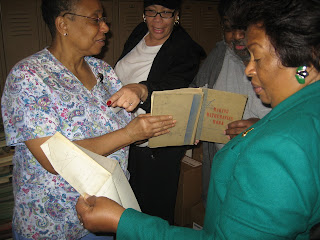 "I'm not surprised they never found a use for them," she says. "Just like our trophies.. when Douglass closed, all of our trophies went to D-B. A few of them were displayed, but most of them were stored away in a back room. It's a shame because, just like folks could have been enjoying the trophies all this time, students could have been learning after school, the basics of reading and arithmetic from these books."

"I am proud the Douglass Alumni Association was able to claim these books before they were thrown away.. it's a honor to remember the legacy these books leave behind," she says. 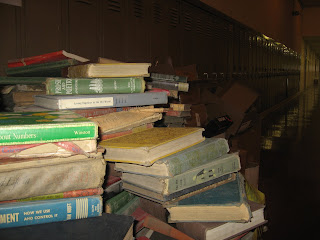 The historic textbooks are being stored right now outside the school building, and the names in the books are being catalogued. A Book Fair is being planned for the future, where those who owned the books, their descendants and others who used the textbooks in their education, can purchase them as keepsakes.

Because they are basic textbooks, they could even be used as learning materials again.

"The Douglass School Book Fair" would be a fundraiser for the Alumni Association, to be used for scholarships," says Doug Releford. "The money would be staying in the community, for the benefit of our youth." 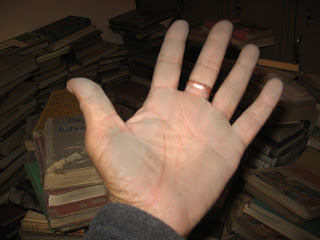 "We owe it to the history of our school and the education we all received," says "Puddin" Watterson.

"These books are why we are, where we are today."
Posted by douglassriverview at 10:45 AM