The spirit of Central Bapist Church is alive in Kingsport on its 90th anniversary! 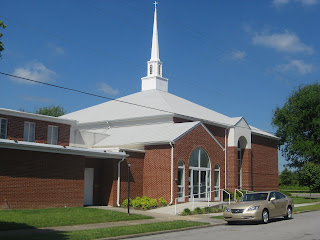 That was the "Central" message, as parishioners, friends and neighbors gathered for the 4 PM celebration at the church on Carver Street on Monday, May 25th, 2008.

After an afternoon meal reminiscient of the familiar down-home dinners served on the church lawn years ago, many folks filled the sanctuary for the activities planned for the special 4 o'clock service. 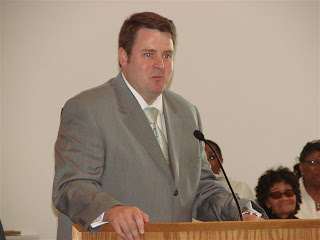 The City of Kingsport recognized Central's 90th birthday, with a visit from Kingsport City Alderman Jantry Shupe. He brought with him a special proclamation from Mayor Dennis Phillips. The proclamation acknowledged that "on May 27, 1918, the Reverend W. E. Blake and 21 devout souls came together for the purpose of worship and enhancing the spiritual well-being of our community," and that on May 25, 2008, "Central Baptist Church is celebrating 90 yeaers of actively glorifying God and the betterment of our community." The day was proclaimed "Central Baptist Church Day in Kingsport, for the continuing spiritual strengthening of our community."

Many pastors of Central exhibited the same qualities of pastoral care, spiritual leadship and outreach builder. Speaker for the service was Pastor Frederick Gordon, who served as Central's pastor from 1983 to 1992, right after Reverend William H. Stokely. 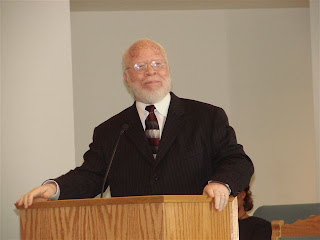 "It was an exciting moment to come back to," Pastor Gordon says. "It means a lot to celebrate 90 years in one city, especially in the African-American community. In this part of the country, you find very few of our churches that have been established that long, and it was especially meaningful by the City of Kingsport sending a representative to recognize that 90 years."

"My message to the congregation came from II Samuel, Chapters 24 and 25," said Pastor Gordon, "and the benefits of having a place to worship. Central has always been a place that people can come to, no matter how life was, they could always come on down to the Church, for the opportunity to worship. If there was trouble in their lives, they could find assistance "restraining the Wrath of God" off their shoulders. Our mission as ministers, deacons, trustees, singers, youth counselors, and parishioners were directed in the prayers of many old saints that worshipped at Central long ago." 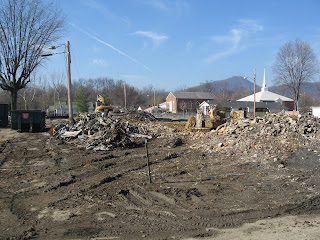 "I noticed a lot of changes in Central while visiting," says Pastor Gordon. "The removal of the housing (the Riverview Apartments) and the attitude of the people is different than it was, years ago. Everyone has a different mindset, that is much more immediate, much more NOW. That's not really a bad thing, because Central seems to be adapting to the new needs of its congregation."

"I see a lot of retirees coming in," he says, "that gives the community a different flavor, too. I spoke to several people, one of whom had lived in Savannah, Georgia for many years, that moved back to Riverview, and a few others who also lived in other larger cities that have now come back." 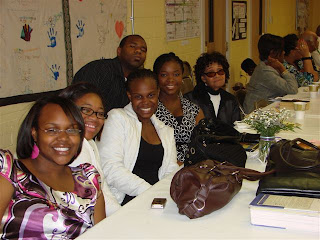 "The most wonderful thing I saw," says Pastor Gordon, "is the large number of YOUNG people at Central. Those young people are looking back to the older saints for guidance. They seem to be bringing a younger, youthful perspective into the church and they're participating in the worship service. That's nothing but good VIBES!"

"That's actually the fulfillment of Scripture that most of us were taught as children by our elders," Pastor Gordon says. "Train them and challenge the way they should go, and they will not depart. We're seeing these young people coming back, because when they were smaller, their parents and grandparents taught them about the church and how it should grow.. they may have left for a while, but they're finding their way back home." 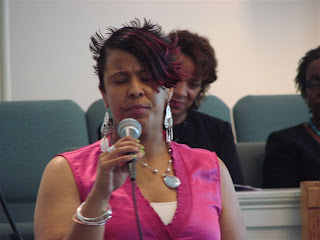 "That is a good thing.. a blessing from God."

Although Central is in search of a pastor to continue the traditions, Pastor Gordon sees that as a natural progression in the evolution of the church. "The older saints that are long gone now, did a great job educating the younger ones who have now been called to step up and take their places in the church leadership," he says. "The younger ones have what they need to move Central forward, with whomever they select, to lead them to that 'promised land' the Lord has promised us all."

At least one follower believes that. 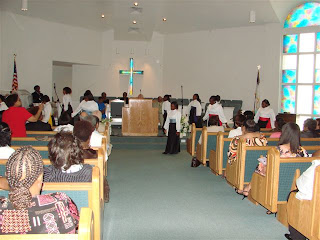 "Pastor Gordon is right," says Lina Bradley. "Our feet are firmly planted on this ground, these are our roots. We are well on our way in that new direction to finding a true Man of God, that has the community and the church as the center of his focus."

"Right now, it's an exciting time to be at Central."

SPECIAL THANKS TO ANDRA WATTERSON, LINA BRADLEY AND VIRGINIA HANKINS FOR THEIR HELP WITH PHOTOS FROM THE CENTRAL CELEBRATION!
Posted by douglassriverview at 8:21 PM